Why I Switched to Keto 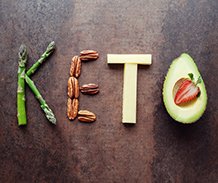 Why I Switched to Keto

I’m slowly getting over feeling like a traitor after many years doing Trim Healthy Mama. This isn’t an article bashing THM by any means because I still see a lot of value in that plan and I know that it works for so many people. There are a few differences that I’ve noticed between eating the THM way and eating the Keto way and I’m just going to lay them out here.

The biggest game-changer for me is…

…how forgiving Keto is.

What I mean by that is that once my body is fat-adapted if I eat something off-plan my body bounces right back. Plainly put, “fat adapted” is the metabolic state your body is in once you’ve been in ketosis long enough that your body has efficiently transitioned from burning carbs/sugar for energy to burning fats from your food, body-generated fats, and your stored body-fat reserves for energy.  I found that when I was on THM if I ate something off-plan I would gain weight immediately and it would take a long time to get myself back on track. Maybe it was mental, maybe it was physical, but whatever it was when I ate something I wasn’t “supposed” to eat it seemed to take forever to get over it.

With Keto, I can eat a donut and jump back in. Let me be clear though, this is not something I do often and it can be accompanied by some nasty side effects (think diarrhea all day long). Doing that is no longer accompanied by strong waves of guilt or self-loathing. If it’s one of my kids birthdays I can eat a piece of cake and know that everything is going to be ok. The freedom that I have found doing Keto is unmatched to anything else I’ve tried.

The other thing I like is that I basically eat the same thing every day and I’m still losing. That may not be a selling feature to some people but for me, I like to keep it simple. I’m not obsessed with food anymore and I don’t slave in the kitchen all day. I have bulletproof coffee, a large salad, and then switch it up for dinner. I am not hungry during the day and I like to do intermittent fasting now that I understand the health benefits of it. When I eat carbs I still stick to easy to digest ones like I’ve learned through THM. Some people like to stick to under 20g of carbs and some stay under 50g per day. Either way, people are still achieving results. This was a change that I needed and after about 5 months of doing Keto, I feel better than I have in years.

If you need help to figure out why you are struggling with weight, what plan will work for you, or why you emotionally eat, then I strongly urge you to check out this webinar coming up. It could be the change you need.