When Mercy Pours Down

A friend of mine reached out to me to ask if I would pray for their marriage. It was on a rocky road. And we all know that it takes two hands to clap, and very rarely are marital problems one-sided. In this situation, the woman was defiant, the man was bitter, and no one was going to budge.

We all find ourselves in these kinds of situations. Maybe not marital problems, but we all have our areas that desperately need God’s mercy–a rebellious child, lazy housekeeping, selfish attitudes, discontent, stupid money mistakes. We’ve all got them. They are those dry, parched places in our lives that are begging for God’s mercy to pour down.

This morning, I was reading about… 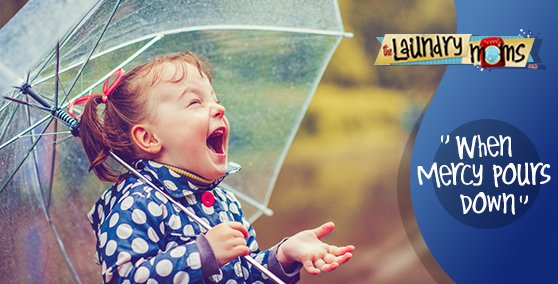 Hosea and Gomer (I know, isn’t Gomer a funny name for a woman?). Hosea was a prophet and Gomer was his wife, and what a back story these two had! Hosea was revered for his close relationship with God. Gomer was a prostitute. That’s right, a hooker! It would be some world-famous televangelist having his wife turning tricks for cash.

But God commanded that he take her to be his wife. He wanted to give a real-life example of His jealous love for us, his people.

First God planted the situation. God puts us through circumstances that challenge us–not to punish us, but to eventually draw us closer to Him. God ordained this marriage between Hosea and Gomer. And whatever He ordains, He sustains. It may look impossible, but as the Bible tells us, “I am the Lord, the God of all mankind, is anything too hard for me?” (Jeremiah 32:27). You’ve got to understand that “with man it is impossible, but with God ALL THINGS ARE POSSIBLE” (Matthew 19:26). Stare at that last verse for a few extra seconds. Not some things, not a lot of things, ALL things are possible. No matter what situation you are in today–a relationship that can’t be healed, a child that won’t change, habits you can’t break–God is the game changer. He turns our “can’t” into “can” and our “won’t” into “will.”

Hosea understood God’s character enough to stick with Gomer through all of these trials–the ridicule, the neglect, the shame, the embarrassment, the rejection. God said, “stick with it,” so he did.

Every time she ran off after other men, Hosea was there to take her back. Not because of who she was or what she could do for him. But because of Who God is and what He does for us. Another child, and Hosea named her after his hurt and pain–No Mercy! And then another child, and the hurt continued. He named him Not My Children. Hosea was at the end of his rope with Gomer and it seemed he couldn’t take anymore. He had a wife that didn’t love him and children he couldn’t even call his own. And he was a prophet, for crying out loud. He was supposed to be one of the “super blessed guys!”

Then it hit an all-time low. Gomer had run after so many other men and prostituted herself till there was nothing more left. She was abandoned and struck down. She ended up being sold as a slave in the town square. I can just hear the people talking about her now, “What trash! Can you believe that’s Hosea’s wife? How humiliating! Well, she’s certainly getting what she deserves!”

No matter the situation you find yourself in, whatever challenge or insurmountable obstacle that lies before you. Remember, what He ordains, He sustains. Nothing is too hard for Him.

Receive His mercy and show His mercy–not because we deserve it or anyone else deserves it, but because God says so. And when we choose to obey, God does something amazing!

Hannah Keeley was once an overwhelmed mom living in a cluttered house, deep in debt, out of shape, and barely hanging on. But one day, after finding herself sobbing uncontrollably into a pile of clean laundry, she realized God has bigger and better plans for her (just like He does for each one of His children). Beginning that day, she began making changes in her life that took her from overwhelmed to overjoyed. Today, she’s helping moms do the same. Hannah, her husband, Blair, and their seven children live in Richmond, Virginia, and are having the time of their lives!