Menu
Faith
When God Surprised us with a Teenaged Son 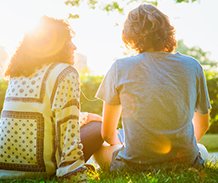 When God Surprised us with a Teenaged Son
by Rhonda Stoppe

The Lord did not bring our oldest boy, Tony, into our lives until he was 15 years old.  For years our family has attempted to find a way to illustrate to people how Tony became our son. About a year ago Tony, now in his thirties, called me, excited about a movie he had watched. He said, “I know I am not a big black football player, but I just saw a movie that reminds me so much of our family. And the mom in the movie reminds me of you!” I had seen the very popular movie only days before. I had cried while watching it because it brought back memories of when Tony first came to live with us. He lived in our home for only a short time, but just as the Lord had used Jochebed’s few years with Moses to shape him for life, God gave us a brief window of opportunity to give Tony a strong foundation for life.

Tony had bonded with my husband even before he had moved in with us. Steve was his youth pastor and they instantly had a wonderful relationship. When Tony graduated from high school, he gave “Big Steve,” as he called him, a card saying thank-you for becoming his dad. It was a touching note that Steve still keeps with his most treasured possessions. We kind of look at that card as Tony’s “official adoption papers.”

During Tony’s short time with us, he and I …

…had great talks about his new life as a believer, and about girls. We talked about his dream to become a fighter pilot, God’s character, and about girls. We discussed God’s plan for marriage–and did I mentioned we talked about girls?  While Tony and I had a great relationship, he related to me with love and respect, but never as his momma. I wanted to be a mom to him, but I respected that he had a mother whom he loved and that he didn’t necessarily need another.

Upon graduating from high school, Tony was accepted to A&M University. It was difficult to say goodbye to him, but we were excited about the opportunities before him. I determined that my new role in his life would be as a prayer supporter.

Right away Tony, our overachiever, went out for the drill team, a much-sought-after and competitive position. The requirements were grueling. All the while, he was taking a full load of classes. By September Tony had been selected for the team–he was thrilled. Thrilled and exhausted.

One day he called home. In a weak and shaky voice, he said he had a severe case of pneumonia and would need to take a break from all activities. Tony told me he was not going to tell his commander he was sick for fear of losing his place on the drill team. Oh, my sweet boy, who had worked so hard to achieve his goals. He had been such a man and accomplished great things. Now all I could hear was a little boy who needed a mother.

I asked the Lord for discernment. As I said earlier, we as mothers need to learn that often, God wants us to step back to allow our young men to battle their trials alone. But somehow I sensed this was different. Tony had worked so hard to land a spot on the team, and now he was sick and weak. I felt that the least I could do was ask Tony if I could make a phone call on his behalf. Reluctantly, he agreed.

I called a friend of Tony’s who was an alumnus of the school. He promised to make some calls. Soon the drill team’s commandant called to assure me that my son’s position was secure. We brought our very sick boy home and I took care of him until he was better. Through that experience, God knit our hearts together, and I became a momma to Tony.

Tony went on to graduate from college and became a fighter pilot. While he has achieved many amazing goals, I was never more proud of him than on the day he called to say, “You know, I am living my dream, and I now realize that it is not enough. My Sunday school teacher, a retired fighter pilot, told me that if I am doing all of this but not surrendered to Christ, my life will be wasted.”

When asked how being a part of our family influenced him, Tony says; “The family was, and continues to be, my living definition of both what God expects from me, and what He wants for me. I am thankful for this example, and I have no doubt that it was God’s plan for our lives to connect.”

Does God want you to consider opening your heart and home to a child who needs a family? If not bringing a child into your home, maybe God wants to use you to be a mothering figure to the friends of your children. Will you consider asking God to open your eyes to how He would have you influence the next generation by showing them His love through your mothering heart?

Rhonda Stoppe is the NO REGRETS WOMAN. With more than 30 years experience of helping women live life with no regrets. Rhonda Stoppe’s book MOMS RAISING SONS TO BE MEN is mentoring thousands of moms to guide sons toward a no-regrets life. Her new book IF MY HUSBAND WOULD CHANGE I’D BE HAPPY-And Other Myths Wives Believe (Harvest House Publishers) is helping countless women build no-regrets marriages. As a pastor’s wife, speaker, and author, Rhonda has helped women to:* Discover significance and LISTEN TO THIS RADIO EXCERPT of Rhonda Stoppe on “The Road Show” with Host Laurette Willis: “Exchanging Your Dreams for God’s Plans”