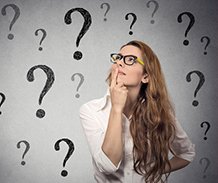 What Do You Do When You Don’t Know What to Do? (Part 2)
by Drenda Keesee

I’m just not sure what to do.

I don’t know if I’m making the right decision.

What do you do when you don’t know what to do?

Last week, we looked at how Joshua made a mistake by going into battle without asking God about it first. When he lost, he whined and questioned God.

Read all of Part One here.

But God wasn’t having it. He didn’t have a pity party with Joshua. No, He reprimanded Joshua. He told him to GET UP!

Then, He told Joshua exactly what had happened. And that’s where we see that the failure wasn’t just on Achan’s part; it was also on Joshua’s. Joshua hadn’t sought instruction from God before he engaged Ai.
He didn’t ask. He didn’t pray.

Joshua could have known about Achan before he sent his men into battle. He could’ve corrected the problem and prevented the deaths of his men. Instead, Joshua assumed things would go just like they had in Jericho.

NEVER assume things in the Kingdom.

Proverbs 3:5 tells us, “Trust in the Lord with all your heart, and lean not on your own understanding; in all your ways acknowledge Him, and He shall direct your paths.”

So, we see where Joshua failed. Now, I’ll tell on myself.

…my husband, Gary, and I were celebrating our wedding anniversary in Hawaii. The plan was for us to fly back to Jackson Hole, Wyoming on our way home so we could spend a few days with our oldest son, Tim, and his family while they were there on vacation.

While we were in Hawaii, it occurred to me that we should stay a few extra days. I casually mentioned it to Gary, but then we both began reasoning that it didn’t really make sense. The condo in Jackson Hole was already paid for, and Tim and his family were already there. So, we leaned to our own understanding (you see where this is going?), and we stuck with the original plan.

When we landed in Los Angeles at 4:30am Sunday, there was clearly something very wrong. It was the middle of the night and there were huge crowds of people at the airport and news reporters everywhere. We discovered a computer crash had basically brought Delta Airlines to its knees and left hundreds of thousands of passengers stranded at airports across the country. Including us.

We ended up living in airports between L.A. and Salt Lake City for the next 48 hours and getting put on a bus for a five-hour trip from Salt Lake City to Jackson Hole after that. It was a complete mess.

We didn’t pray about it.

See what I mean? Every single one of us has had moments where we lean to our own understanding, or where we do what we think makes the most sense, or where we make assumptions about how things are going to go based on how they’ve “always” gone before. But we end up missing God and failure happens.

The good news is that God has a way out of the trouble, even if we’re the ones who caused it. And the best news is that we don’t even have to deal with the trouble in the first place.

God wants to help you.