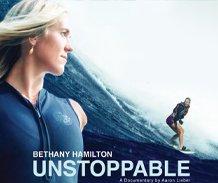 BETHANY HAMILTON: UNSTOPPABLE  is a compelling documentary that spans the young woman’s life, beginning before the shark attack and continuing throughout her comeback and impressive career.  Composed of interviews with friends and family, home videos spanning her life, competition footage and technical details about the sport of surfing, the story will inspire young and old alike, to go after your passions in life and achieve your dreams.

The PG-rated story doesn’t feel like a documentary because of the excellent editing and amazing footage. There’s more to Bethany’s story than her survival of the tiger shark attack that took her left arm. And although it touches on the fame Hamilton achieved after the movie, “Soul Surfer”, it’s her athleticism, optimism, and determination that is truly inspiring. The same tenacity that had her competing only a few months after the shark attack, continued even after she had a baby, conquering 60 ft. swells in the worlds toughest surfing competition, where she beat a six-time world champion and the top-ranked surfer in the world. I sat through most of the movie with my mouth open, in awe of the stunning visuals, gorgeous cinematography, and amazing feats Bethany performs effortlessly on her board. Filmmaker Aaron Lieber started working on this project in 2013 and continued filming for six years. Through the years, Bethany literally grew up in front of the camera. She got married, had a son and continued entering competitions. Bethany and her husband, Adam, pray with each other and exemplify a couple with a strong foundation of faith – their marriage is just as “unstoppable” as Bethany. I highly recommend this movie for all ages – it is truly an inspiring story unlike any other!
“Remember to Choose Your Movies Wisely”