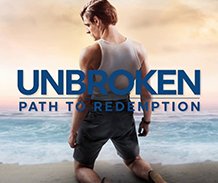 Holly on Hollywood
“Unbroken: Path to Redemption”
by Holly McClure

“Unbroken: Path To Redemption” is a faith-based drama that’s a sequel to the 2014 movie “Unbroken”. The story focuses on Louis Zamperini’s (Samuel Hunt) return home after WWII and how his haunted memories of surviving 47 days adrift in the Pacific and being tortured in a Japanese POW camp for two years, torments his life. Zamperini marries the love of his life, Cynthia (Merritt Patterson), but soon their marriage is in trouble because of his PTSD and alcoholism, that turns him into a mean drunk.  Eventually, Cynthia turns to God for answers and as a last hope, attends a Billy Graham tent revival (played by his grandson Will Graham), that ultimately changes their lives.

The PG-13 is for mature themes dealing with wartime violence and Zamperini’s nightmares, PTSD, and alcoholism so it’s best for mature teens to adults. The story shows how despondent Louis is in life, and at the point of giving up, agrees to go to a tent revival. Hunt gives a powerful performance as Louis. Graham (Franklin Graham’s son, Billy Graham’s grandson) brilliantly plays the famous preacher who saves Louis with a message about forgiveness and redemption, changing Louis’ life for eternity. Will looks and sounds like his grandfather which makes the story and message even more impactful. The story is beautifully told with a powerful message about faith, love, hope, redemption, and perseverance. Zamperini would have loved it!