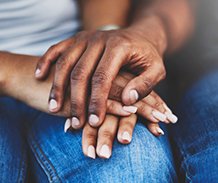 As most young girls will do, Julie would often dream of the man she would marry and the beautiful wedding she one day planned to have. Along with her growing list of wedding ideas, when she was twelve years old Julie also began writing up a list of the kind of man she hoped to one day marry. Of course, she wanted him to be handsome and romantic, but even at her young age Julie knew the most important quality about the man she would marry would be his love for Christ.

Julie grew up in a Christian home in Atlanta, Georgia where everyone agreed she was a “good girl.”

When other girls were dating…

…she showed little interest in relationships with boys. She recalled, “I was a good girl. In youth group I had signed a True Love Waits commitment card, and I showed my resolve to save myself for marriage by wearing a promise ring on the finger that I hoped would one day wear a wedding ring.”

Since Julie was not attracted to any of the boys in her life, she said, “It was easy to be strong and remain sexually pure when there was no temptation.”

After high school Julie landed an internship with a production ministry in Texas. She was elated about the opportunity to work with the ministry and with the idea of an adventure that would take her to another state.

Once in Texas she quickly learned about all the hard behind-the-scenes work that went into the production ministry. Rather than basking in the glamour of being involved in working in the Christian music industry, Julie found herself helping set up production in a hot, old warehouse in Tyler, Texas.

Julie recalled, “I was sitting at a computer when some young guy named Josh walks up to me with a broom and tells me to sweep the warehouse floor. I didn’t know who he was or why he had asked me to do so, but I agreed that the warehouse was dirty and started to sweep.”

You’re Better Than That

Josh grew up the oldest of 10 children. His mother had homeschooled all of them through high school, so he had spent a lot of time studying independently while his mother saw to the education of his younger siblings.

From his unique upbringing, Josh learned the value of self-discipline and how to be self-motivated. And since Josh was smart and could finish his academic assignments rather quickly, he found a lot of time to explore his interest in sound design, learning to work the soundboard for his church and taking advantage of other production opportunities.

Once Josh graduated from high school he was confident he wanted to pursue a career in sound and production. He was elated when he landed a job with a production company in Tyler, Texas.

Josh soon learned how being hired as a respected member of the production staff would not be enough to earn the respect of the interns he would manage. Josh had a young face, so even though he was older than he appeared and had a lot of experience in his field, gaining respect from a room full of interns would not be easy for him.

When Josh handed Julie the broom, little did she know that she was the fifth person he had asked to sweep the warehouse, and Julie was the only person who had complied.

Later that day when Julie’s team was gathered together for a meeting, Josh was introduced as their new manager. Julie thought, “Man, I’m glad I swept that floor. Who knew this guy was a highly respected member of the staff?”

Over the next several months Josh and Julie became good friends as they worked together on their production. Julie recalled, “I found myself hoping to see Josh before or after every show. I remember how my heart would flutter with excitement every time Josh walked into the room––hoping he would notice me.”

Julie’s excitement turned to disappointment when she learned that Josh had feelings for another girl. However, Julie resolved to continue to be Josh’s friend. Julie was also aware of the company’s strict policy against staff and interns dating, so technically she was in a better position to just enjoy Josh as a friend.

However, in his immaturity, Josh ignored the no-dating policy and one day kissed the other girl. Although the girl had allowed Josh to kiss her she later reported the kiss to Josh’s bosses, and he was immediately let go from his position. Staff dating interns was grounds for immediate dismissal. Josh knew the policy, but unfortunately, he had not taken seriously the consequences of his forbidden actions.

After Josh had gathered together his belongings, he went to find Julie to explain his departure. Julie recalled, “I remember Josh finding me on campus and telling me he had to leave. When he told me he had kissed the girl and that’s why he was fired, my heart broke, and then I became infuriated with him.”

Julie went on, “But then God lit a fire inside me to speak. I slammed my fist down on the table as I rose up out of my chair, proclaiming loudly, ‘Josh Berry, you are so much better than that. God has big plans for your life. Stop being so stupid!’”

Josh knew Julie was right. Her courage to call him on his immature actions was exactly what he needed to hear. And those words were what triggered in Josh a deep admiration for Julie’s passion for living a life surrendered to Christ.

There was silence in the car as Julie drove Josh to the airport to fly back to his home in Nashville. She wondered if she would ever see Josh again, and he wondered what his next career steps should be. He also quietly considered the powerful statement Julie had made earlier when she said, “Josh, God has big plans for your life.”

He hoped Julie was right. He was encouraged and inspired by the faith she had in the man he could become, now he would need to live up to that expectation.

Tune in next time for the rest of the story!

True Love Waits is a conference dedicated to training teens and young adults to commit to wait to have sex until marriage. TrueLoveWaits.com