Holly on Hollywood – The Kid Who Would Be King 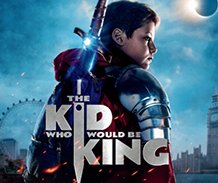 THE KID WHO WOULD BE KING is a modern-day take on the King Arthur legend in an epic adventure. British schoolboy Alex (Ashbourne Serkis) and his best friend are constantly getting picked on by bullies. But when Alex stumbles upon a sword stuck in a stone and pulls it free, he becomes the legend King Arthur. With the help of Merlin (Patrick Stewart), Alex and friends have to defeat the wicked and evil Morgana (Rebecca Ferguson) and her undead monsters.

The PG rating is for fantasy action, violence, scary images, thematic elements including some bullying, and language.  Alex (Louis Ashbourne Serkis) is just trying to get by in school with his best friend, Bedders, without getting picked on by bullies Lance and Kaye. One evening when they chase Alex, he winds up in a construction area and finds a sword in a stone – he pulls it out, brings it home and soon his fascination with King Arthur and the Knights of the Round Table comes to life with the help of Merlin who helps him fight the dark forces of the dead king’s evil half-sister Morgana – a witch-turned-dragon who swore vengeance when she was defeated centuries ago. Morgana and her horde of undead soldiers on flaming horses threaten the safety of the world, I was mesmerized by Serkis (son of award winning Andy Serkis). He’s one of the greatest child actors to grace the screen in some time and truly radiates his hero character. The tradition of having kids save the day works in this movie. And for those who know about  Camelot – the movie begins with a very cool animated retelling of the myth. Themes of bravery, loyalty, bullying, friendship and taking a stand for others shape this fun adventure for older kids to adults.
“Remember to Choose Your Movies Wisely”