“Jungle Book” is based on Kipling’s classic story about the “man cub” Mowgli (played by the darling newcomer Neel Sethi), who was raised by a pack of wolves and enjoys a life of peace with all of the animals in the Indian jungle – except for the fearsome tiger ShereKhan, who threatens his life. Guided by his best friend Bagheera, the panther takes Mowgli on a journey to find his own kind to protect him. Along the way he meets the lovable, giant bear Baloo, an enormous python Kaa and a gigantic ape named King Louie, all voiced by Idris Elba, Ben Kingsley, Bill Murray, Scarlett Johansson and Christopher Walken.

Producer/director Jon Favreau (one of my favorite directors) has created a visually stunning, epic adventure, that had me… 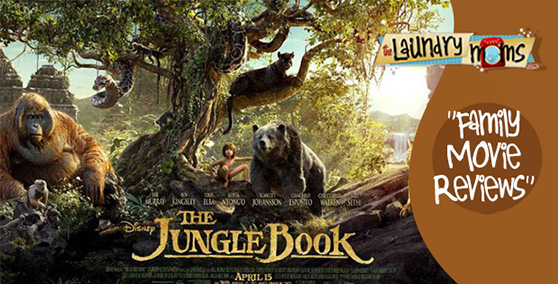 …mesmerized from the first scene to the last!  He used ubertechnology to create a realistic, PG family-friendly fantasy, that equally mixes intense action and drama with humor and lovable characters, all ages will enjoy. I love how seamlessly and brilliantly the classic songs, “The Bare Necessities” and “I Wanna Be Like You”, are woven into the story. And I enjoyed the positive messages about the strength of family, enjoying the simple things in life, using your gifts and talents, counting on friends and the importance of helping others.

Bravo Disney! You’ve remade a new classic from a golden masterpiece that will become a new standard …it’s one of your best family films for a new generation!