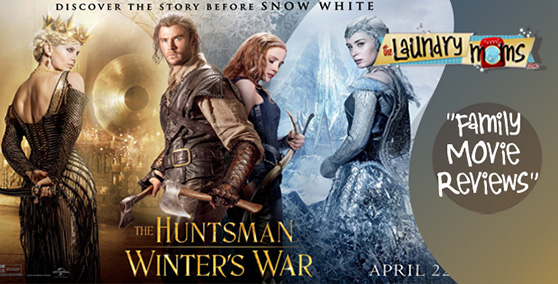 The Huntsman: Winter’s War is a live-action adult fairytale that tells the story of how Eric (Chris Hemsworth) came to be the Huntsman alongside his love and fellow warrior, Sara (Jessica Chastain). The tale begins years before Snow White (who is not in this adventure), showing how evil Queen Raveena (Charlize Theron) comes into power and why her sister, Queen Freya (Emily Blunt), turns to the dark side, awakening magical powers and becoming the Ice Queen. Eventually the two queens battle for control of their Kingdoms and the powerful magic mirror. It’s up to Eric and Sara to save the land before it’s too late.

Part prequel and part sequel, the PG-13 rating is for lots of fantasy action, adventure, violence and some sensuality (a romantic dip in a hot spring in birthday suits), so parents, this is not a kiddie-friendly fairy tale. And yet, there are characters like Queen Freya and Sara who are life size reminders of Elsa from Frozen and Merida from Brave, as well as a few scenes that reminded me of Narnia, Lord of the Rings or Game of Thrones. I’m a fan of Hemsworth no matter what he’s in. And I enjoyed seeing Chastain’s character Sara bring a romantic side to Eric that we didn’t get to see in Snow White and the Huntsman. Theron’s golden wicknedness and Blunt’s dark-side vulnerability are equally mesmerizing to watch, along with the spectacular special effects and gorgeous costumes.

I enjoyed this adult fairy-tale action adventure that has a happy ending, proves love conquers all and that fairy tales do come true – but never truly end.