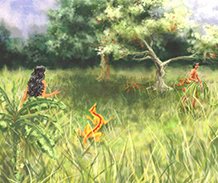 The First Family
by Drenda Keesee

So how did this family thing get started? How did families become so messed up in the first place? That is exactly where we need to start—with the first family, Adam and Eve. Their lives were perfect! God created everything they would need to live without fear, without sickness, without hunger, and they had each other in perfect harmony. Can you imagine being married to the perfect man or woman? I mean, they didn’t have to worry about body fat, making rent, or even what they were going to wear that day.

Satan, a fallen angel who despised the place of authority that God had given them. You see, Satan was already on the earth when God created Adam and Eve, and he considered the earth his. God gave Adam and Eve authority to rule over the entire earth on behalf of His Kingdom (Hebrews 2:7–8). Satan didn’t have the deed to the earth, Adam did.

God crowned Adam with authority (as referenced in Hebrews 2), which gave him the strength to rule. God was essentially saying, “I will back up your every word.” The entire Kingdom of God, His power, and every angel backed up what Adam said on the earth because Adam was part of God’s family. He was a king’s kid.

Satan despised this creation that ruled over him and knew the only way to gain control over Adam and the earth realm was for Adam to take the crown off, to give up his authority. Satan had no power to take the crown from Adam, so he had to find a way to entice Adam to actually relinquish the crown. To do that he managed to deceive Adam and Eve into believing that they could not trust God and that they should rebel against His authority and government. His temptation revolved around one tree in the garden, the only thing that Adam was told he could not have, the tree of the knowledge of good and evil. Adam and Eve were not to eat from that tree. Adam did eat of it and lost his position of authority and his ability to rule or reign over Satan in life (Genesis 3).

What happened next is the part that I want you to focus on, because it gives us a clear view of the current state that exists between men and women today. When God confronted Adam after his rebellion, instead of taking personal responsibility, Adam blamed God and his wife. When God confronted Eve about her sin, she blamed the serpent (Satan) for deceiving her. And the blame game continues to this day. Our culture is full of entitlement and victim mentalities. We all need to remember that as long as we blame others for our issues and don’t take personal responsibility, we remove ourselves from God’s provision and His correction, forgiveness, and restoration. By turning our backs on God as Adam and Eve did, we are doomed to repeat our sin and mistakes and duplicate them in our children.

Adam and Eve’s rejection of God’s authority left them and the entire earth realm under the dominion of Satan and outside of God’s ability to provide for them. Life changed, not because God wanted it to, but because Adam and Eve had rejected God’s provision and tied His hands legally, leaving them on their own with the result of their rebellion.

“Cursed is the ground because of you; through painful toil you will eat food from it all the days of your life. It will produce thorns and thistles for you, and you will eat the plants of the field. By the sweat of your brow you will eat your food until you return to the ground, since from it you were taken; for dust you are and to dust you will return” (Genesis 3:17–19).

Having lost the provision of God in the garden, where everything was already provided, Adam was now forced to find a way to survive on his own. The earth realm now would require painful toil and labor for it to produce. The harsh reality of this weight and the fear it produced caused Adam to lose sight of anything else, and survival would now become his daily routine and priority.

Things also changed for Eve as she was told how these changes would affect her in the future. “I will make your pains in childbearing very severe; with painful labor you will give birth to children. Your desire will be for your husband, and he will rule over you” (Genesis 3:16).

These two scriptures clearly define the problem between men and women. God had designed the family system to be a blessing, but now it was corrupted by sin. We find the first family in dysfunction—two broken individuals, blaming each other and God for what had just happened. The man is toiling and laboring to survive, while the woman is trying to get his attention. But she finds him preoccupied, and her continued plea for his time is largely unanswered. Sadly, she finds he is ruling her, but not loving her.

Adam and Eve had two sons, Cain and Abel (Genesis 4), who had a sibling rivalry issue, and not a small one, either. In fact, despite God’s direct warning to stop his sin of jealousy, Cain murdered Abel! The very first family was full of dysfunction!

That was the second family breakdown and clear evidence of the earth curse that Adam’s sin had initiated. That curse has been working against families ever since. However, God did not stand by and let His children be destroyed by Satan. He sent His own Son Jesus to reclaim the family from the curse of sin, to refashion us in His glory and repurpose His plan for families. Jesus’ death paid the legal debt owed by Adam’s sin and now allows us to tap into God’s grace, His power and wisdom, so we can overcome the curse that Adam brought upon the earth. We can now have peace in our families and our families can be blessed if we say yes to Him and His plan!

“Christ has rescued us from the curse pronounced by the law. When he was hung on the cross, he took upon himself the curse for our wrongdoing. For it is written in the Scriptures, ‘Cursed is everyone who is hung on a tree’” (Galatians 3:13 nlt).

God wants to help your family overcome the curse of sin. If you’re willing to listen, He will impart to you the knowledge to overcome the same rut of sin and the same mistakes and dysfunction the family has cycled through since Adam’s time. He will show you what He has intended the family system to look like—and He will help you live it!

The family is the building block of God’s kingdom and should naturally display His righteousness. In simple terms, the family, living God’s way, looks appealing, whole, and healthy to those still trapped under the curse. It is a beacon of light in a dark world. Our own families are depending on us to get it right, learning what family life is all about. We also have generations coming after us that need to know the truth. The good news is all of this is now possible through what Jesus did on the cross. We can have great families!