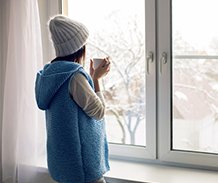 Is anyone else feeling the February blahs? I am. I am feeling them HARD y’all. There are literal mountains of snow in my front yard (so much so that my husband has actually made my kids a toboggan hill), it’s super cold (think between -20 and -40 DAILY), and I am in hibernation mode. Unless I have an appointment outside of the home I am not leaving. This is the time of year when greasy hair and PJ pants are the norm and makeup gets put on twice a week for the chiropractor and church. I’m just being real folks!

It can also be the time when…

Extra pounds sneak on and you don’t notice because you’ve been wearing the same leggings for two weeks and they’re very forgiving. The scale, however, is not so forgiving. February is an important month to keep your goals in front of your face, create a vision board, go for a frigid walk, make a nice big salad, and remind yourself where you want to be this coming summer.

Do you want to avoid swimming yet again because you’re uncomfortable in your skin? Do you want to hide in the grocery store aisle when you see someone from high school? This is the time y’all! This is a GREAT time because you can still hide under your big sweaters and track pants and get away with it. You still have five full months until it’s full-blown summer. If you lose a single pound per week (totally doable) then you’ll be 20lbs down by July. How would you feel 20lbs less than where you’re at right this minute? I would feel pretty amazing actually!

It’s time to start treating February with more respect! Instead of it being the month you gave up on your new year’s resolutions, treat it like the month that gave you hope again. The month that reminds you there’s still time and kicks your booty into gear to re-read whatever diet plan/lifestyle change book you’re following, to get a little stricter with your eating, to go for a 20-minute walk in subzero temperatures, and to say goodbye to 20lbs by July.