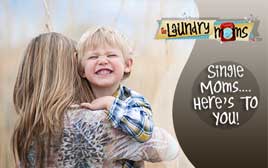 Single Moms, are you feeling ALONE? Even though you may feel like you’re the only one raising kids without a spouse, statistics reveal you are not alone. But far beyond the comfort of knowing there are lots of other single moms out there who have the same struggles as you, you should be happy to know YOU ARE NOT ALONE because God says you are not! 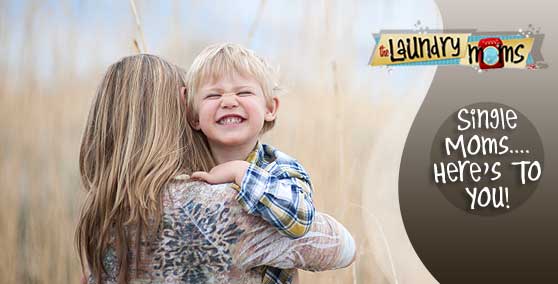 God is more interested in building the character of your children than you are? And if your kids do not have a father, be encouraged – Psalm 68:5 says the Lord is a father of the fatherless.Just meditate on that for a minute. Your partner in parenting is GOD HIMSELF! [Years ago I shared Psalm 68:5 with a young man whose father had died of a drug overdose. When this young man heard that God promised to be a father to him because he was fatherless, he was filled with relief, courage, and hope for the future. Years later that young man has graduated from Bible College, leads worship in a church and pursues Christ first in his life.

So Mom––What’s your part? – If you determine to walk closely to your God, He is faithful to keep His Word and help you raise your son. Isaiah 41:10 God says:

Fear not, for I am with you;

Be not dismayed, for I am your God;

I will strengthen you, I will help you,

I will uphold you with my righteous right hand.]

I have a friend who was a single mother of two sons. I have known Sherry since her boys were very young. Over the years Sherry has diligently worked on two major relationships…

Sherry took seriously God’s promise to be a father to her fatherless sons and knew He would be the one to help her gain their obedient respect. She taught her sons that they were obeying God when they obeyed their mom, which is the greatest motivation for obedience. Sherry also spent a great deal of time building a thriving, loving relationship with her boys.

The result of Sherry’s diligence paid off when her sons became adolescents. When their father was unavailable to help her enforce the rules on her 6-foot tall boys, Sherry offered a correction, not so much based on her authority to do so, but on God’s authority. And upon the relationship, she had built with her boys.

Along with trusting the Lord to help Sherry earn the love and respect of her boys, she wisely looked to her church for believing mentors for her sons. She wanted the boys to have heroes to look up to. How better to find God-fearing men than to ask the Lord to direct her sons to men in the church? Now in their thirties, Sherry’s sons can look back and name several Christian men who taught them to be men who honored the Lord–and their mother.

When looking for someone to mentor your son, look not just for religious men, but men who have a genuine passion for Christ. Don’t find men who simply follow religious rules, but men whose faithfulness draws your son to imitate their Christlike character.

Timothy in the Bible was raised by his mother and his grandmother. (The text in Scripture implies Timothy’s Greek father was likely not even alive when the Apostle Paul came on the scene.) God brought the Apostle Paul to not only mentor their young son, but he became Timothy’s father-in-the-faith. At the end of his life, the Apostle Paul handed the very mantel of his ministry over to his young protege. Instructing Timothy to “guard the deposit entrusted to you” (1 Timothy 6:20, 2 Timothy 1:14).

Our oldest son Tony did not come to our family until he was 15 years old. God raised up my husband to be Tony’s father-in-the faith and allowed me to be Tony’s momma as well. Tony is now a fighter pilot, godly husband, and father.

We met Kacy Benson when he was in his early twenties. When we met Kacy he was desperately in need of a family’s influence and a godly role model. The Lord took Kacy from a night-club stand up comic to an evangelist. Sharing the gospel with thousands each year. (You can read more about Tony, and Kacy’s stories in my book Moms Raising Sons to Be Men.)

Elizabeth George, author of A Woman After God’s Own Heart says, “Being faithful to God is not revealed in any one heroic deed but in everyday occurrences.” Look for men to mentor your children whose lives reflect Christ in the everyday-ness of life.

This generation aches for heroes who are genuine, passionate, and noble. Determine to expose your children to men who sincerely love the Lord, and passionately glorify Him.”*

Rhonda Stoppe teaches women to LIVE LIFE WITH NO REGRETS

Rhonda is the author of MOMS RAISING SONS TO BE MEN, a book that teaches moms to guide sons toward a no regrets life. With over 20 years experience of helping women build a life with no regrets as a pastor’s wife, mom, speaker, and author, Rhonda has helped guide women to:

Break free from regrets that hold them back

Discover they are significant

Have the marriage others dream about

Become more influential than they ever dreamed possible

Moms Raising Sons to Be Men-Check it Out Here: