Spring Cleaning can be more complicated than simply purging junk and scrubbing down the casa according to one study. Apparently the chores accomplished and WHO does them can actually affect marital intimacy.

Rebecca Coffey in her article Of Lust and Lysol published in the Scientific American (April 2013) magazine states, “…married couples in which men take on a greater share of the dishes, laundry and other traditionally female chores had sex less often than average which in this study was a about five times a month. Yet couples in which men confined themselves largely to traditionally male chores such as yard work enjoyed sex more frequently than average.” 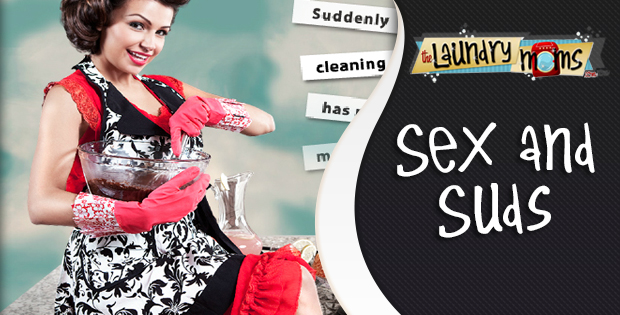 “Taken to the extreme, men who performed all the traditionally female chores would have sex 1.6 times less often than men who did none of them.”

Yikes! No wonder husbands prefer to clean the garage!

All the tired women are thinking “Thanks for the tip! He’s on dish duty from now on!”

The point of the study is NOT to teach you how to get out of it, so you can get more sleep. It’s to prove that you will be more attracted to your husband when he does the MANLY chores around the house.

According to this study there is something to gender chore assignments. Unconsciously my family follows the gender chore assignments to a T. It’s just natural for our strong boys to carry the 5-gallon water bottles. They lug the gargantuous trash bags and take care of the sweaty tasks out doors. My girls would sit down and cry if I asked them to do half of these jobs. The females in our home sweep, mop and scrub in the comfort of the air conditioner. Let’s hear it for a/c!

While this is true in general, my hubby DOES roll up his sleeves and stands in front of a sudsy sink a few times a week simply to spend time with his girls.  Personally I find that EXTREMELY attractive. In fact, I would say the act probably HELPS our marital intimacy not hurts it. But of course we counter balance all sorts of studies.

I guess if he did not leave the house by day, I would be less likely to swoon over the gesture of love at night.

The bottom line is it’s ok if your husband prefers to be locked outdoors during  Spring Cleaning. Tie on your frilly apron, windex your windows WELL and enjoy watching your man sweat in the yard. It’s healthy for your marriage. Happy Cleaning!