Right In The Palm of Your Hand

Please promise me you’ll read this with some grace, and try to be understanding. I’m touching on a soft spot this week, but I don’t want to offend anyone. I just need to speak what is on my heart. There is something happening right underneath our noses (literally!) that could lead to destruction if we don’t take action right now.

There we were, shoving ice cream sundaes, apple dumplings, and Coca-Cola cake in our mouths, when I stopped eating and began looking around at the other tables. 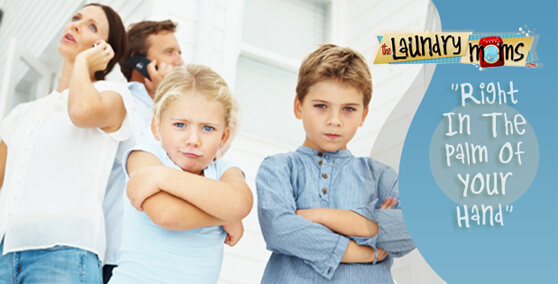 Every single family–EVERY SINGLE FAMILY–was looking at cell phones. The only ones who weren’t was a woman with two children who was being seated at a table, and an older gentleman taking a good look at a menu. I can hardly explain it. There were two tables with couples, each person was staring down at the table at their phones, occasionally touching or swiping the screen. There was another table with a mom, dad, and a very young boy. Both parents spent the entire time looking at their phones while the boy ate his macaroni and cheese and then got up and wandered from parent to parent, trying to engage them in conversation. There was another family across the room. The parents were sitting on one side of the table while their two young daughters were sitting across from them. The entire time, the parents were holding their phones. All those girls saw were the backs of their phones! Another family was sitting in the corner with every single person was on a phone!

Suddenly, that apple dumpling was not sitting too well in my stomach. I was amazed at what a blatant image this was of our culture. We have become addicted! Now, don’t get me wrong. I’m not staging a revolt and I love my iPhone as much as the next mom. In fact, you wouldn’t even be able to read this message right now if it weren’t for modern technology. But I’m just wondering something–

Do we have phones, or do they have us?

I Peter 5:8 tells us, “Be well balanced (temperate, sober of mind), be vigilant and cautious at all times; for that enemy of yours, the devil, roams around like a roaring lion [in fierce hunger], seeking someone to seize upon and devour.”

Satan never comes knocking on the front door. He always sneaks in the back. And in this case, it’s often our back pocket. That tool we use to stay in touch could be the one that is strangling the life out of our relationships. Our kids need us. Our spouses need us. We need each other. And that doesn’t happen through a screen. It happens when we engage.

Satan would love nothing more than to distract you from your family, and distract your family away from you. He hates unity and will do everything in his power to destroy it. And he’s sneaky. He has a fierce hunger and wants to devour you and then chase it with your family. Isn’t it funny how that verse refers to him as a “roaring lion?” The only thing I find peculiar about that terminology is that when a lion is sneaking around, he’s never roaring. He’s always super quiet. But then I realized something. When you’re surrounded with noise, you don’t pick up on the sound of a roar.

Our lives have become pretty noisy. The roaring sounds a lot like alerts, texts, and ringtones. And once he gets his claws in you, you’re stuck. the text turns to a chat, turns to a link, turns to a video, turns to Facebook, and so the spiral continues.

So, what do we do? Toss our phones out with the wilted lettuce? I don’t think so! It’s become a necessity in our lives. Again, God’s Word handles that situation. The verse tells us to “be well balanced (temperate, sober of mind), be vigilant and cautious at all times.” We need to first, be aware of what is happening. And second, get some balance back.

As strange as it seems, we do not ALWAYS have to be accessible. Yes, we can put our phones away for a while. We can set curfews and time limits. We can make a “no phones at the table” rule and “all phones are off at 8pm” rule. We can have a spot to put ALL phones when evening comes around so we’re not clinging to them into the night. We can also have our kids loosen that grip they have on their phones and teach them limits as well.

We can also practice the lost art of engagement. It’s when my eyes meet your eyes and I see into your soul. It’s when I truly hear your words and not just respond with a gratuitous, “uh-huh.” It’s when I get on your level, see your face, receive your words, and truly consider what you are saying to me. Relationships are not built in clicks and scrolls. It’s built in hearing your spirit, as well as your words. And sometimes it’s built in the silence of just being together–with no distractions.

This week, I want to challenge you to do something bold and beautiful, something that will make that enemy of ours run away with his lion tail stuck between his haunches. I want to challenge you to set limits on your phone. Apply curfews and make some family rules. And I also want you to do something I put into practice a long time ago, something that has changed my life. When you are on the phone or on the computer, and someone speaks to you (especially your child), look away from the screen and engage. The only way our children are going to know they are worthy is if we show them they have worth.

Like I said at the beginning, this email may cause some hostility, but I don’t mean to offend you. I want to empower you! I also want to hear from you. Do you already set limits? Do you need to set more? Where do you stand on the kids and phones? Leave a comment, and let’s get the conversation started. Like always, I LOVE to hear from you!