Respectfully Disagreeing With Your Husband 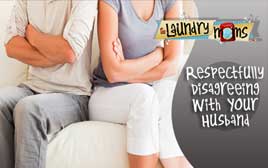 “Respectfully Disagreeing With Your Husband” 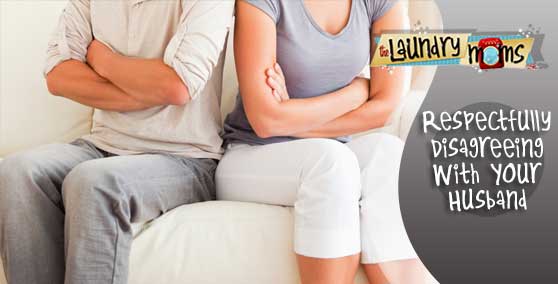 My father was one of the friendliest, most gregarious men I’ve ever met. He loved people — but he also loved a spirited debate. Mom always said Dad would argue with a fence post.

My mother was decidedly not fond of fiery discussions. She has always detested conflict of any sort. Dad would often tease Mom, trying to get a rise out of her, but she would not be baited. He might as well have been arguing with that famed fencepost, for all the luck he had in drawing his wife into an argument.

By nature, I tend to take after my father, but by conscious effort, I try to follow my mother’s example.

Scripture says it would be better to live in a desert or in the corner of a roof than in a house with a quarrelsome and ill-tempered wife. (Proverbs 21:19; 25:14) My mother’s willingness to “abandon a quarrel before it breaks out” (Proverbs 17:14) made our home a more pleasant and peaceful place to live — for all of us.

Of course, you may not always see eye-to-eye with your husband. When there are areas of disagreement or concerns that need to be discussed…

take care to do so in a calm, cool, collected, and consistently respectful way.

Communicating respect to your husband does not necessitate keeping all your thoughts to yourself. It does not mean going along with his every whim, even when serious reservations exist.

Showing respect is not about suppressing your feelings; it’s really more about the tone with which those feelings are expressed.

A disrespectful tone communicates, “Listen, you idiot, let me set you straight on this matter, because it’s obvious you don’t know what you’re talking about.”

Of course, we would (hopefully) never actually say such a thing, but our husbands will sometimes hear these words in our tone, even when we don’t utter them outright.

Many times, our husbands do things in a different way than we would do them, but that doesn’t mean their way is wrong. Go with the flow for as long as possible, then when an issue arises that you really feel strongly about, you will have stored up some goodwill by not having contradicted the two or three dozen choices he’s made prior to the current one. It is easy for our husbands to grow weary and lose patience when we argue and second-guess each and every decision they make.

As for preventing difficult discussions from escalating into angry arguments, follow these guidelines to keep tempers from flaring:

Pay attention to what your spouse is trying to say to you. Hear him out. Don’t just pretend to be listening while you mentally rehearse what you plan to say next.

“Spouting off before listening to the facts is both shameful and foolish.” – Proverbs 18:13

If you will focus on all the reasons you love this person instead of on the things that irritate you about him, you will be much less likely to say something you later regret.

“Hatred stirs up conflict, but love covers over all wrongs.” – Proverbs 10:12

Don’t allow the pitch to creep up in your conversation. Maintain a gracious, soft-spoken demeanor at all times.

“A gentle answer turns away wrath, but a harsh word stirs up anger.” – Proverbs 15:1

Well thought-out word pictures and analogies are a great way to communicate a concern without being abrasive and accusatory.

“A word fitly spoken is like apples of gold in pictures of silver.” – Proverbs 25:11

Let your words be filled with kindness and seasoned with grace; do not resort to name calling or exaggerated accusations.

Try to see the situation from your spouse’s point of view. Be empathetic. Put yourself in his shoes to better appreciate his perspective.

“Whoever is patient has great understanding, but one who is quick-tempered displays folly.” –Proverbs 14:29

Weigh your words carefully, always and only speaking the truth in love. Don’t be rash.

“A hot-tempered person stirs up strife, but the slow to anger calms a dispute.” – Proverbs 15:18

Rid your tone (and your heart) of all pride and condescension, neither of which serve any purpose but to stir up strife and discord.

Show appropriate, unfeigned remorse over any wrongdoing. Apologize for offensive things you have said or done without excusing your actions or casting blame on your spouse.

“Those whom I love, I rebuke and discipline. So be earnest and repent.” – Revelation 3:19

Through her example, my mother taught me that I don’t always have to have the last word; I don’t need to drive home my point; I’m under no obligation to convince others I’m right.

It takes two to argue. Isn’t it liberating to know that? It takes two — and you don’t have to be one of them. 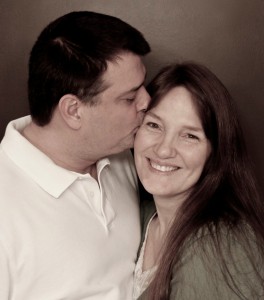 Jennifer Flanders is a faith-walking, husband-loving, home-schooling, hymn-singing, deep-thinking, book-writing, hand-crafting, life-savoring mother of twelve. She blogs at Loving Life at Home about pursuing the high calling of marriage and motherhood with joy, passion, and purpose.