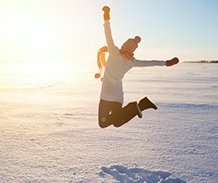 Release It!
by Meggan Larson

There are times when our weight doesn’t seem to want to budge even though we’ve tried everything under the sun. We’ve been on plan steadily for months, we’ve tried S meals, FP meals, E meals, no meals, cheat meals, etc. and nothing seems to be working! You keep losing the same couple of pounds and gaining them back again week after week and maybe you want to cry or dropkick the scale at this point. I completely understand. In fact, that’s where I was for most of January. I was getting so discouraged because I was most definitely on plan and last year I lost over 10lbs in January alone!

I knew what I needed to do…

I needed to look at what else I could change. I was doing everything right according to the Trim Healthy Mama plan. I was separating my meals by 3 hours, I was switching up my fuels, I was sticking to more deep S meals then heavy S meals, I was keeping my portions on the smaller side, I was even making sure I wasn’t snacking after dinner! I literally couldn’t have been doing the plan any better if I tried. In the last year and a half I have gone through a lot of emotional trauma and am only now seeing the effect it’s all really had on me.

Because of this, I’ve been really drawn to the emotion oils from Young Living but I hadn’t used one in particular yet. It’s called Release and the write up for it says this (mind you I didn’t read it before using it): “This is a powerful blend for enhancing the release of memory trauma from the cells of the liver where anger and hate emotions are stored. The frequency of the oils in Release may aid in the letting go of negative emotions so one can progress in a more effective and efficient way. It helps to release frustration (Reference Guide For Essential Oils).”

I simply put it on my feet before bed hoping for a “release” in some of my weight! When I got on the scale in the morning I was down 7lbs from a few days earlier! I could hardly believe it. I stepped off the scale and slowly backed away with my hands up in case the scale decided to change its mind. Naturally, I would recommend this oil to anyone (and have been!) just in case you have some unresolved trauma or issues that you need help dealing with (if you do want to order it and need help to do so please email me and I can help! (meggan@thelaundrymoms.com).

But the point of this article is merely to suggest that you may be facing a deeper issue than just eating well. Maybe it’s emotional, maybe it’s related to trauma. Only God knows really. But if you’re having trouble getting past that barrier of weight loss and you’ve tried everything ~ you may want to try this.