today as our featured guest writer for our

Woo woo, don’t we all want one of those. Well, they’re out there, and one of them could be yours.

When I was a kid, my grandparents had a farm and that’s where we spent most of our time. We gardened, bottle fed the calves and celebrated at the end of the day by jumping from hay bale to hay bale.

From tree climbing to making bike ramps, life was good, because we earned it. My parents taught us responsibility. We had to help with the dishes, the laundry, vacuum floors. We were a part of a team and it felt good. It was all for one and one for all. There were times we would see a friend with a new bike or hip jeans and wanted them so badly. Which is fine. Wanting and demanding are two different things. It’s all in the tude, the attitude, that is, of how we conduct our wish. 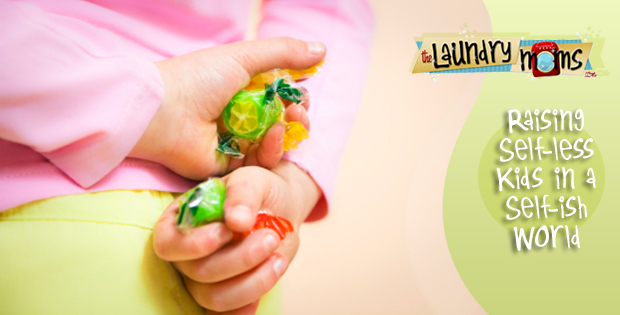 If you do nothing, it will come. It’s a fight to stay humble. Webster’s dictionary defines self-ish-ness as lacking consideration for, concerned mainly for ourselves.

In an effort to turn Selfish into Selfless, it’s important to show our kids what it looks like. You can talk about it all day, as we live in our little “bubble of life” going to and from soccer and ballet practice, where everyone seems to have enough money, enough food, plenty of jobs and resources at their fingertips.

But within a 20 miles radius, if you look for it, you’ll find homelessness, children going to bed hungry, (can you imagine) and parents frustrated – they can’t provide for their family.

Have your kids volunteer at a shelter, a charity where they see first hand, ordinary families like you and me, that have fallen on hard times. Take them to a foster care facility and let them take goodies they bought with their own money. Have them play with the kids. Self-LESS-ness takes the “me” and turns it into “we.” The “me, myself and I” mentality becomes a community, a team effort.

Don’t you appreciate the items you bought or the activity you enjoyed much more, when it’s earned, rather than handed to you?  An action verb carries much more weight than a passive verb. Mary drives a car. Mary is driven. Wouldn’t you rather be driving, jumping, providing clean water for / or building a house with Habit for Humanity. Let’s get out there and be the action verb in someone’s life today.

E -Early Arrival. (Being late is selfish. You think the world should have to wait on you?)

A- Ability to show empathy. (Put yourself in their shoes. What must it feel like to need help and have to ask for it?)

M- Money, give some away. (Invest your money in worthwhile causes / charities that make a true difference.)

S- Stubborn – don’t be. (Take Responsibility for your mistakes. No excuses. Own it and move on.)

Kids DO what we DO, not what we say. They are little reflections of us. If we act conceited, self involved, argumentative, placing our needs over those around us, we’re leading them down the same path. They mimic what they’re taught. Turn those self-involved attitudes into team players that make a true difference in this world. Now go find your version of a hay bale and start jumping.

Here’s to Living the Best Version of You.

Philippians 2:4 Let each of you look not only to his own interest, but to the interest of others.

Stephanie Pletka is the creator of the humorous mom-blog Spit-up & Heels . It’s her goal to encourage and empower moms to live their authentic self, while dealing with life’s struggles and juggles of being all things to all people. She lives in Atlanta, GA with her husband John and their four children.