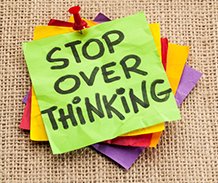 What I found was that…

I was overthinking it.

I would spend most of the morning dreading going to the gym and effectively would talk myself out of it. It wasn’t until I stopped thinking about it altogether and got up and went that I started going regularly. It shocked me how the simple act of NOT thinking about it made all the difference.

Recently my husband went back to work full time after being off for a year and a half due to an injury. It was really nice having him home to help and honestly, I was getting nervous the closer his start date came. I realized that I was overthinking it. The fact is when you’re thrown into the situation you just do it! It’s only day 3 but I am rocking it. My house looks amazing, I am staying on track with my eating, I make my husband’s lunch every day which he LOVES, and I’ve even been dealing with sick kids, ear infections, and a super random bed-wetting incident that had me up for an hour in the middle of the night. I almost forgot how capable I really am and now that I’m not overthinking anything and just DOING it, I know that I’ve got this.

So what are you overthinking? Is it the gym like I was? Is it getting on board with a new way of eating? Is it waking up earlier? It’s time to stop thinking about it and start doing it! I promise you that you are far more capable than you think you are.

You CAN do this…and it’s time to start!