One Step At A Time

One Step At A Time

Have you ever felt really discouraged by how slowly you’re losing weight? I know I have. And if you’re like me, then this article is definitely for you this week. I know I keep talking about my new Fitbit and I will likely continue to talk about it because it is AWESOME! If you don’t have one yet and can squeeze it into the budget you should really do it. It’s incredibly motivating, you can challenge and encourage friends, and it’s not that hard to walk (for most people). After a few weeks of having my Fitbit and achieving my goal of 10,000 steps each day I thought for sure that I would’ve lost several pounds. I mean I had gone from taking less than 1200 steps per day to at least 10,000 every single day.

There was no way that I hadn’t lost weight yet, right? 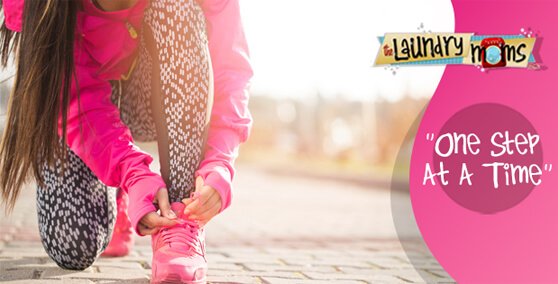 Not only had I not lost weight, I had GAINED 2lbs! Now this is where with every other exercise program I would normally throw in the towel and eat a pint of ice cream to console myself that I am clearly the ONLY person on the entire planet who gains weight while exercising. I would usually decide that it doesn’t work (after 2 or 3 weeks) and go back to being frustrated with my weight and depressed that nothing ever works.

If it feels like I’m in your head right now it’s because I get it. I understand the frustration of starting something new and seeing other people lose weight like it’s air and watch your weight cling to you as though its life depends on it. I’ve felt the helplessness of worrying that nothing you ever do will be good enough and you’ll never lose all the weight you want to lose. I too have felt the embarrassment of running into someone from your past and you now weigh 60lbs more than when you last saw them and they of course look the same. I’ve also struggled with jealousy when a friend who was heavier than you now looks amazing and you know if you had stuck with the same program you might look like that too. That’s what I want to touch on here.

As I felt the same feelings of frustration starting to creep up on me I knew it was a crossroad. One I had been at many times before and never chosen the path that would keep me going on even if I wasn’t seeing immediate results. Not once had I just stuck with whatever it was that I was doing if I wasn’t losing weight. I consistently gave myself a time limit and if within that limit I hadn’t lost a single pound I was done with it. I thought about all of those times I could’ve continued on with something by faith but instead I let myself get discouraged and give up instead. Imagine how much sooner I would’ve reached my goal if I had continued working out. Years and years I’ve wasted by starting and giving up when I didn’t see immediate weight loss. I had to decide how much longer I wanted that cycle to continue. I know for sure that starting something and giving up on it after 3 weeks does NOT produce results. So this time I decided to just keep going anyway. I mean what is the worst thing that can happen by me continuing to walk 10,000 steps and more everyday anyway? Last week I lost 3lbs. And twice this week my husband complained that I walk too fast now. Sorry, not sorry.

Most days I wake up with my husband at 6am to take a 30 minute walk before he leaves for work. That is completely unheard of for me. I was never a morning person and frankly I’m still not. But I can drag my buns out of bed in the morning and go for a quick walk to wake me up and give me some peace and quiet before my kids wake up. I’m probably never going to be a P90X champion but I can walk. I walk everyday anyway, now I’m just more intentional about how many steps I take. Each step I continue to take is leading me down a new path I’ve never been on before. The path of persistence even in the face of a seemingly lack of results. I like this path. Won’t you join me on it?

***Our very own Meggan Larson has been nominated for a contest where she could win $10,000!!!! Meggan has been such a support and encouragement to so many! Let’s rally together and show her our THM support by voting for her! xo-Angela
Click This Link to Vote Now! You can register through FB and it takes about 30 seconds (you can vote daily!) Just do a search for Meggan Larson or scroll through the page to find her. ? https://searchforgoodness.com/en/home ***