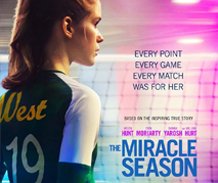 “The Miracle Season” is based on the inspiring true story of the West High School girls’ volleyball championship team in 2011. The story follows Caroline, ‘Line’ (Danika Yarosh), a dynamic, friendly, outgoing senior, who was the volleyball team captain and best friends with Kelly (Erin Moriarty). One night ‘Line’ rode home on her moped and tragically crashed into a tree, killing her instantly. As the team mourns her death, they enter their season playing to win the championship for Caroline – then ultimately, themselves. Kelly takes over the role of Captain and as she becomes confident and works with coach Kathy (Helen Hunt), they lead the team to win state.

The PG family-friendly drama, is best for mature kids 8 and up, who enjoy a feel-good sports movie. The game of volleyball hasn’t been featured competitively like it is in this movie – it was intense down to the last play. I enjoyed the camaraderie and interaction the girls had with each other, particularly between Line and Kelly. The scene of Caroline’s death is dealt with respect, as well as her mother’s terminal pancreatic cancer. Hunt plays Coach Kathy with grit and determination. William Hurt plays the role of Ernie, Caroline’s father, who came to every game and supported the team all the way to their championship. I met the real Kathy and Ernie and they are truly inspiring people of faith. There are sweet scenes of girls being best friends, mixed with typical teen girl moments. Themes of overcoming, teamwork, showing kindness to unpopular kids, treating everyone as an equal, and having a strong faith, make this an inspiring film for all ages but especially pre-teen and teenage girls. This is a story that will make you want to stand up and cheer! “Live Like Line”, is the saying that became famous. Be sure and stay for the credits, to see the real girls, their families and footage of the team.