I’m here to tell you that… 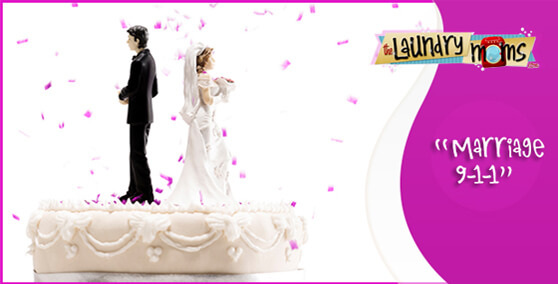 …there is always hope!

Habit #1: Let it go. If you’re a mom like me, you’re always right. It’s just a curse we have to live with. We’re always right; they’re always wrong. But this attitude can be the downfall of a marriage. Whether you’re right or not is never the issue. The real issue is if you’re going to allow the issue to pass. You don’t need to be right every time. In fact, you don’t ever need the recognition of being right. Let it go. If an argument begins to surface, don’t allow it to do damage. Be willing to be wrong (even if you’re right). Just refuse to argue. There have been plenty of times when I knew that I knew that I knew I was right. And instead of arguing, I just said a simple, “okay, honey!” Being right is not nearly as important as making your marriage work.

Habit #2: Put his needs first. This is one of the best habits to have in a marriage. Try it for thirty days and see for yourself if it doesn’t work wonders. Always put his needs first. For some reason, “serving” has gotten a bad rap in recent years. But there is real strength in learning to serve others in love. And it always comes back to bless you in ways you could have never anticipated. Try it for yourself. Make him a cup of coffee in the morning. Go ahead and iron those clothes for him to wear to work. I always fill up the tank in Blair’s car when I’m using it to run errands on the weekends. These kinds of actions are not signs of weakness, but signs of strength. Only someone who has a rock-solid character would ever be able to truly serve another in love without expecting anything in return. He may not reciprocate immediately, but just give it time. He will.

Habit #3: Pour on the sugar. There’s no getting around it, men are known for their egos. Instead of fighting it, work with it. Go heavy with the compliments. I remember one time when I really wanted to watch a movie and Blair couldn’t figure out a way to hook up the new system we had just bought. He was ready to give up when I said, “You’re always so smart with this kind of stuff. I have no idea how you do it, but you always figure out a way to make it work. You amaze me.” I don’t know how he did it, but in less than twenty minutes, I was watching that movie! Everything tastes better with a pinch of sugar, so lay it on thick. Even if you have to search high and low, find something you can compliment him on and do it—a lot!

Habit #4: Honor him—on and off the court. One mistake a lot of moms make in their marriage is to not truly honor their husbands. A husband and wife should always honor one another in a marriage. You could say, “why should I honor him if he doesn’t honor me?” Well, mama, it’s got to start somewhere. Be the better person. Noah Webster’s 1828 dictionary provides this definition of the word, ‘honor.’ A testimony of esteem; any expression of respect or of high estimation by words or actions. To honor someone means you hold them in high esteem, with great respect and high value. You can’t badmouth your husband to your friends or gripe about him in front of your kids and maintain honor in your marriage. Honor has to be a quality that you have “on and off the court” when it comes to your marriage. Build a habit of honoring your husband with your words and your actions when you’re with him and even when you’re not.

Habit #5: Don’t nag and don’t threat. The only thing nagging and threatening will do in a marriage is push those two people further and further apart. Don’t let it happen. Sure, there are some things you wish he would do, but nagging won’t ever work. If you really want something to change, try to sandwich the request between a compliment and an offer. For example, if you want him to pick up his dirty clothes from the bathroom floor, here’s how you may present it.

Now, here’s the trick. If he still doesn’t do it, let it go. Go ahead and pick them up and toss them in for him (without telling him you did it). Remember, when you serve with love you will be blessed in return. Just be the better person and let it go. It’s just a little bit of effort, really, and you will be building a better marriage because of it. Accept your husband as he is without expecting or demanding a change.

Habit #6: Be grateful. Gratitude goes a long, long way in a marriage. When you can train your thoughts to be grateful for your husband, you will be pulling more and more of that positive behavior out of him. It’s a huge step in faith that will pay off later. Don’t focus on his faults. Find those qualities that you love about your husband and let that be where your thoughts are centered. If you only focus on what’s going wrong, that’s the only thing you’re going to be bringing out in your marriage. Instead, focus on what’s going right!