Kelsey loves to cook. But she handles her cooking way different from me. I go for the quick and easy, the tried and true. Kelsey, on the other hand, loves to find the most complicated recipes that have ever been created and then try to replicate them in our kitchen.

Sometimes, well, not so much.

This past week, Kelsey tried to make some raspberry almond macarons (not to be confused with macaroons). Macarons are an almond-flour based confection that are pretty darn fancy, schmancy. Everything went fine and dandy at the beginning. She pulsed the blanched almonds into a powder. The next step was to make a meringue to mix into the almond flour. Well, my hand mixer broke last year and I still haven’t replaced it (can you believe it? That’s why I have such strong forearms.). Now, try to make meringue without a hand mixer. She tried beating it with a fork, but it just wasn’t setting up. Then she used a blender and that ruined the whole thing.

Not to be discouraged, she pursued her macarons… 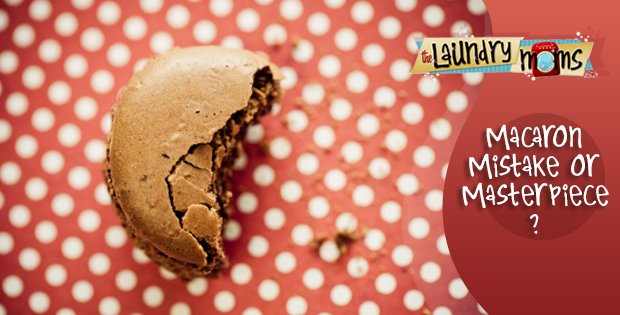 The dough wasn’t firm enough so the cookies all ran into one another when she put them on the pan. Then while they were baking, she tried to make up a ganache to put between the cookies. Now, the ganache wasn’t setting up either. It seemed if anything could go wrong, it did. Finally, she pulled the cookies out of the oven and found out that every single one was stuck to the pan.

So Blair and I stepped in to access the damage. He scraped the cookies off the pan, while I beat the ganache some more. Then, with a little patience, we took each cookie, put some chocolate ganache on top, and topped it with another cookie. We called the kids in to enjoy the dessert. The kids ranted and raved over the confection. Comments like, “these are delicious!” “Kelsey better make these again!” and “These are the best cookies I’ve ever tasted,” were going back and forth between the kids.

A huge mess up turned into one heck of a success story.

Sometimes life seems to feel like that–like one big mess-up. And the more we try, the more we tend to complicate things and make matters worse. Sometimes we just have to let go and let God turn it around. Whether you want to believe it or not, God has a plan for you that will bring you joy and fulfillment. And He knows just how to get you there. In fact, He can lift you out of that mess and get you there in moments when you could easily spend a lifetime just spinning our wheels in the sand trying to do it yourself. Are you going to hang on to what you know? Or are you going to let go and trust in what you believe?

Scripture tells us that God began a good work in your and He will carry it on to completion until the day of Christ Jesus (Phil. 1:6). God has every single resource already lined up to finish what he began in you, but until you can let go and let Him work through your life, you’ll never reach that glorious place. You’ve got to know that God is never going to begin something in you that He isn’t planning on finishing. He has given you dreams, visions planted in your heart, goals for your life, your family, your home, your health, and He is more than enough to allow them to come to fruition.

Sometimes the mess-ups can be so big that we feel there is no way we can rise above them. But, God reigns over the messes, too. He can take us from where we are to where He has created us to be. And He doesn’t waste anything. It’s called grace.

It’s a good thing Kelsey didn’t get so angry that she threw away those cookies. Otherwise, we wouldn’t have enjoyed such a delicious dessert. God has something delicious in store for you. Give Him your mess-ups and let Him work His grace through them.