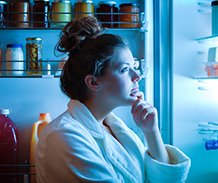 I heard a statement the other day that no good decisions happen after 9 pm. It was referring to financial decisions (which is true) but I think that it applies to pretty much all decisions. Whenever I’m tempted to do something shady, it’s after 9. Whenever I’m super snacky and don’t care if it has sugar in it or not… it’s after 9.

I think this solution is simple, don’t you?…

Okay, I’ll admit I totally do that once or twice a week but for the rest of the week, that’s just not going to happen. I think it’s important to get in the right headspace each night to make sure that you don’t succumb to temptations and late-night attacks. Something really simple you can do is brush your teeth after dinner. It sounds a bit silly but honestly, it works! Psychologically your brain knows that eating time is over when your teeth are brushed. Also, everything tastes kind of gross right after you brush your teeth right? Who wants to snack on ice cream with a fresh mouth?

It’s not going to save you every time but if you can get into the habit of mentally preparing yourself to be done eating long before your head hits the pillow then it will help you succeed. A lot of late-night snacking is just out of boredom. Keep yourself busy! Snacking is also a result of habits. If you’re used to watching a movie with a big bowl of popcorn each night or getting yourself a bedtime snack then it’s time to change those habits. You know you don’t HAVE to eat at night, you’re just bored. A good tip I heard once was to get some yummy flavored teas and add some liquid stevia to a nice hot cuppa. You’ll feel like you’re having a yummy treat but it’s without any calories! Win-win.

You can do this mama. It might take some adjusting and getting used to but I know that you can stop the late-night snack attacks. I believe in you!

P.S. If you need help figuring out why you are struggling with weight, what plan will work for you, or why you emotionally eat, then I strongly urge you to check out The Freedom Workshop… It could be the change you need.

Meggan Larson is a wife, mom of three, and challenge overcomer! Being diagnosed with a rare form of cancer and undergoing aggressive chemotherapy when her second-born child was only three months old, gave Meggan an expected twist to her life. Dealing with pregnancy weight gain and the debilitating effects of chemotherapy, Meggan’s weight soared to over 228 pounds. Feeling humiliated with no desire to socialize, Meggan was desperate for a change. Shortly after losing 20 pounds with the Trim Healthy Mama program, Meggan found out she was pregnant with baby number three, which ended in an emergency C-section and unexpected hysterectomy. Despite the challenges she faced, Meggan has just celebrated her one-year “trimiversary”, and her success of releasing just over 60 pounds! Meggan is confident that her success on plan is “doable” for anyone looking to gain back their health and wanting to live a trim and healthy lifestyle!