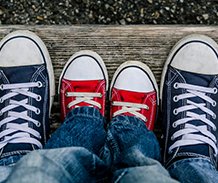 Just Take The Next Step!

When God tells us to do something, He doesn’t always provide the details. In fact, He almost never provides the details. When He told Abraham to pack up and leave everything he knew and loved, God didn’t waste any time explaining where he was supposed to go or how he was supposed to get there. He just said, “Go!” And Abraham, knowing what was best for him, obeyed.

That turned out pretty good, right?

…Gideon to trim his army down to a fraction of the size and not take any weapons into battle, He didn’t waste time patting him on the back and reassuring him that it was all going to be okay in the end. But Gideon sucked up his courage and obeyed.

That turned out pretty good, too!

Sometimes, when God tells us to move forward or take action, He doesn’t waste time poking, prodding, and patting on the back. He simply says, “Do this.” And if we know what is best for us, we obey. He doesn’t alwasy provide a map. He just says take the next step.

The reason we can obey is because we know Who God is! If you didn’t know Who God was, you would never be able to follow through when He tells you to do something. Does that make sense? When He says take the next step, you can be sure that it is going to lead to some place great.

I just want to take a moment to give you a pat on the back. I’m sure God has placed something on your heart (He’s always pushing His kids forward). Follow through. You don’t have to know how it’s going to turn out. That’s God’s job. He is the Lord of the harvest, not you. All you have to do is obey and leave the rest up to God. He is a good God. He loves you. And He takes pleasure in blessing you.

This is one time when being clueless is a good thing. When God says to go, just go. You don’t have to sweat the details. He’s already taken care of them. Just take that step.