Menu
FaithFamily
It’s Right in Front of You 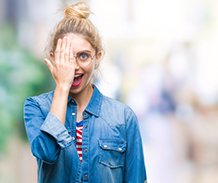 It’s Right in Front of You

Years ago my son Kyler had glasses. I mean, he still does but this story is from his childhood.

Even though he needed glasses, he never wore them.

Do you have a kid like that? They have a retainer but don’t often wear it. They have glasses, but rarely put them on. They have a coat, but prefer to go outside in the freezing cold with shorts and a t-shirt?

Yeah, I thought so.

So, anyway, one day I was driving them to school and Kyler came out with his glasses on (gasp!) and got in the car. He began looking around as I pulled down the street and said, “Wow! This is amazing! Everything is so clear!”

Kyler isn’t the only one who sacrificed his vision every now and then. I think most of us are guilty of it. We are all taught to establish long-range goals and that is very important. In fact, if you don’t have a physical list of specific goals for your life, you should do that immediately (I’ll wait). Nothing becomes tangible in your life until it becomes specific in your mind.

But, sometimes, we can get so wrapped up in our long-range goals that we sacrifice the steps that are right in front of us ~ the very steps that will make our goals come to fruition.

the woman who wants to get her entire home decluttered but won’t raise a finger to fold that load of laundry sitting in the basket on the floor or clean out that toy box that has been sitting untouched in the corner of the room for over two months.

Or the woman who wants to get in shape and lose twenty pounds but won’t put on those athletic shoes sitting beside her bed and go out for a walk or pick up those hand weights that are gathering dust beside the entertainment center and do some shoulder presses?

Do you see what I’m getting at? Long-range goals are vital for success, but they will never be reached if we don’t establish a keen vision to see the next step to get there. So, what do you have in front of you RIGHT NOW? What is the next step? What can you do during these next five minutes of your life?

Rub those eyes and look around. The best step to reach your next level of success is probably right in front of you.