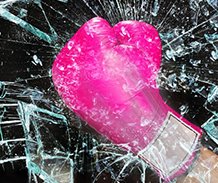 Faith is a muscle. You need to exercise it to get stronger!

AH! This is soooo good… We’re on the final part of the It’s Going Down series! You don’t want to miss it!

This lesson is PART 3 of a 3 part series. If you haven’t tuned in to Part 1 or 2, make sure you check those out!

Previously, we talked about distinguishing Satan’s lies from God’s truth and how you need to approach Satan so you NO LONGER are the butt of his jokes. Today, we’re talking about how you can get that abundant life even when the enemy keeps messing with you.

So you know how to distinguish Satan’s lies from the truth.. You know how to call Satan out on his lies.. Tune in NOW to find out how to FIGHT the enemy!

The joy of the Lord is my strength! He gives me joy and I am strong because of it!When you call Satan out on his lies, you are thrown into battle. You need to be ready to fight off those evil little lies the enemy is telling you.

But did you know that most of us enter battle without a weapon? That’s how Satan wins!

If we don’t see miracles overnight if we start feeling depression coming over us… The enemy has won!

It’s called a battle for a reason, Mama. It’s a fight!

Don’t forget your weapon… Bring the Word of God with you in EVERY fight and every fight will end up in your favor! Because you have the favor of God.

We’re scared of the things we don’t face.Do you need a little inspiration? Stay tuned and check out what David says to Goliath in battle. It’s EXACTLY how we need to tell Satan, “it’s going down!”