I Threw Chocolate Away 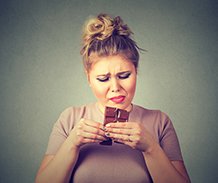 I Threw Chocolate Away

The holidays have been over for several weeks now but if your house is anything like mine, some of the holidays “goodies” are still lingering around. Some days I’m strong, and some days I stuff my face with 10 pieces of chocolate before I really realize what I’m doing. It’s like I’m trying to get them in quickly before my brain realizes what’s happening. In a way it’s comical, in other ways it’s pretty sad. I made a bold move the other night though. I threw the chocolate away.

I was having trouble sticking to my guns. There it sat on a counter day after day, teasing me, taunting me, and calling out to me incessantly. I find that when it’s been a long time since I’ve caved then the cravings aren’t so bad. When it was the night before, that chocolate may as well have a megaphone attached to it.

So I did what any sane rational person would do.

I got really angry and dramatically chucked out every piece of sugary candy I could find. I left my kids stash alone because that doesn’t tempt me for some reason. I’m not above stealing my kids’ candy in a moment of weakness but for whatever reason, it just doesn’t usually happen.

I was tired of doing really well all day long and then gorging in the evening. I mean really! Here I was meal prepping for the entire week ahead, making salads in jars, meatballs by hand, using my instant pot and crockpot simultaneously. I felt like a full-on proverbs 31 woman!

After 8 pm, I turned into an Amazon savage determined to hunt down any piece of sweet candy I could find and stuff it into my gullet as fast as humanly possible. It wasn’t pretty y’all. I needed to make a dramatic move and to my husband’s amusement, I did.

Now it’s been several days since I’ve had any sugar and I feel so much more in control. I always forget just how devastating sugar is on our bodies in the moment because it tastes sooo good. But you know what else tastes good?

And also sugar-free desserts. They say nothing tastes as good as skinny feels but in those low points I need something else to eat because sitting on my couch snacking on the thought of all the pounds I’ve lost just doesn’t seem to cut it. Make a dramatic move and throw out the chocolate! It belongs in the trash anyway.

If you want to experience the same aha moment that I did then I highly recommend you check out the Freedom Weightloss Workshop here!