How Will You Teach Your Son Chivalry? 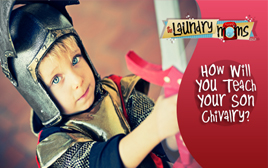 “How Will You Teach Your Son Chivalry?”
By Rhonda Stoppe
Author of Moms Raising Sons to Be Men

When my son Brandon was around five years old, his younger sister, Kayla, would frustrate him by knocking over his Lego creations. In his anger, Brandon would respond with harsh, hurtful words.

In the midst of these conflicts, I had a choice to make. I could respond to Kayla with as much anger as Brandon, while excusing Brandon’s harshness as a product of the frustration Kayla had instigated. I could also ignore the conflict and let them work out their differences. Or, I could … 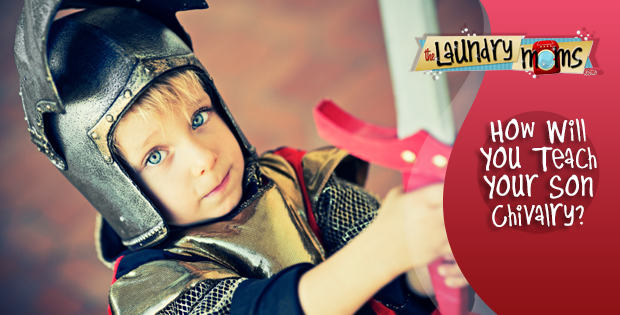 Kneeling down so my son could look into my eyes, I affirmed his frustration. I assured him his sister would be corrected for her violation. Then I began to explain to Brandon how kindly God forgives us when we do wrong. I told him God wants us to respond to others the way He treats us. I appealed to the kind and gentle man I knew Brandon wanted to be.

I tried to help Brandon see that reacting harshly out of frustration would begin to develop in him habit of responding with angry, hurtful words every time his little sister offended him. And he would grow into a man who spontaneously reacted to others in the same manner. His habit would in fact cause him to become an unkind and harsh man.

Basically, I concluded by telling Brandon, “If I let you talk to Kayla harshly when you are angry, you will one day talk unkindly to your wife and daughters. And I know you want to be a kind man.” And, “I know you don’t want your sister to marry a man who is harsh or angry. If I allow you to treat her in an unkind manner, she will become accustomed to being treated badly, and may marry a man who is mean because you taught her that’s what men do when they are angry.”

Yes, those were big words for a five-year-old, but the idea was not too big. I can still see his little face looking into mine, trying to wrap his mind around what I was teaching him.

I rehearsed these concepts with my son many times over the years. I even made him pull the car over so I could remind him, that the stress of learning how to drive did not give him permission to speak harshly to his sister in the back seat.

To this day, Brandon will tell you the impression my what-kind-of-a-man-do-you-want-to-be speech had upon his development as a man. A year ago, Brandon married a precious godly young woman to whom I am confident he treats with kindness.*

Rhonda Stoppe teaches women to LIVE LIFE WITH NO REGRETS Rhonda is the author of MOMS RAISING SONS TO BE MEN, a book that teaches moms to guide sons toward a no regrets life. With over 20 years experience of helping women build a life with no regrets as a pastor’s wife, mom, speaker, and author, Rhonda has helped guide women to: Break free from regrets that hold them back Find new passion and zeal for life Find victory over people-pleasing Discover they are significant Parent without regrets Have the marriage others dream about Build an incredible legacy Become more influential than they ever dreamed possible
Moms Raising Sons to Be Men-Check it Out Here: