Holly on Hollywood – How to Train Your Dragon: The Hidden World 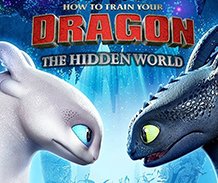 Holly on Hollywood
“How to Train Your Dragon: The Hidden World”
by Holly McClure

In HOW TO TRAIN YOUR DRAGON: THE HIDDEN WORLD, Hiccup (voiced by Jay Baruchel), is now chief and ruler of the Viking town of Berk alongside his beloved Astrid (America Ferrera) and faithful dragon Toothless. They have created a world where dragons live alongside the villagers in peace but that world is shattered when warlords decide to enslave the dragons to fight for them. Master dragon hunter Grimmel (F. Murray Abraham) decides to capture Toothless by using a female Light Fury dragon as bait. Toothless and Hiccup must find the legendary “Hidden World”, where dragons can live safely after the two save the Isle of Berk, one last time. Also voiced by Cate Blanchett, Gerard Butler, Craig Ferguson, Jonah Hill.

This PG family-friendly 3rd installment has our lovable duo going up against Grimmel, who wants to kidnap and enslave dragons. There is an abundance of fight scenes with bloodless violence (occasionally played for laughs) between humans and dragons, funny moments (when Ruffnut (Kristen Wiig) annoys her captors), charming scenes (a mating dance between Toothless and his lady dragon), a sad scene (one character presumably falls to his death) and a “Hidden World” that is a colorful land (kind of an “Avatar” for dragons) with a bittersweet ending that brings closure to this final film. Complete with an all-star cast and positive messages for all about friendship, courage, love and loyalty.