How To Become A Good Listener

How To Become A Good Listener

Listening with Our Whole Being

Being a good listener involves more than listening with our ears. The woman of your man’s dreams is one that… 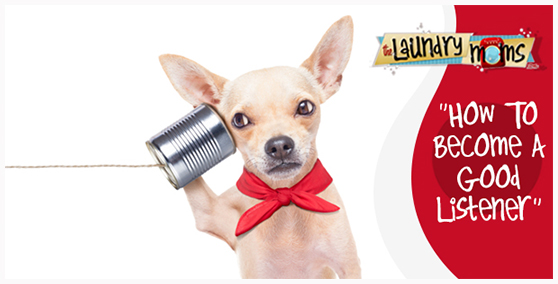 …listens with her whole being.

We listen with our eyes. How do your feel when you are trying to have a conversation with someone and they are not making eye contract? How do I feel when my husband is watching a football game and I walk into the room to tell him something? It is not enough for him to push the mute button. I want him to turn his handsome head, make eye contact, and pay attention. I mean, who’s more important, the Carolina Panthers or moi? One way we show our husbands we love them is by stopping what we are doing and turning to face them when they speak. This shows them that we are tuned in and what they have to say is important to us.

We listen with our ears. This may seem redundant, but far too many times we nod and agree but let the flow of words go in one ear and out the other. I was struck by an article in the Charlotte Observer about a friend for hire. Joanne Ivancich was described as a friend for hire, earning as much as $500 a month to sit and listen to whatever a person wanted to talk about. She is called a “personal development coach,” who helps people focus and make decisions. Basically, she receives payment for two things: asking good questions and telling the truth. The Observer noted that Newsweek referred to this type of coaching as “part consultant, part motivational speaker, part therapist and part rent-a-friend.”[1]

A startling Kansas newspaper ad read. “I will listen to you, without comment, for thirty minutes for $5.” [2] The person who placed the ad received ten to twenty calls per day. The man in your life wants a companion who will truly listen to what he has to say. Let’s make sure he doesn’t have to “hire a friend” or phone a stranger, but has the ear of the woman of his dreams – you.

We listen with our facial expressions.

Charles Swindoll tells a story reported by Dr. Karl Menniger about how facial expressions invite someone in or shut them out.

During his days as president, Thomas Jefferson and a group of companions were traveling across the country on horseback. They came to a river which had left its banks because of a recent downpour. The swollen river had washed the bridge away. Each rider was forced to ford the river on horseback, fighting for his life against the rapid currents. The very real possibility of death threatened each rider, which caused a traveler who was not part of their group to step aside and watch. After several had plunged in and made it to the other side, the stranger asked President Jefferson if he would ferry him across the river. The President agreed without hesitation. The man climbed on, and shortly thereafter the two of them made it safely to the other side. As the stranger slid off the back of the saddle onto dry ground, one in the group asked him, “Tell me, why did you select the president to ask this favor of?” The man was shocked, admitting he had no idea it was the president who had helped him. “All I know,” he said, “is that on some of your faces was written the answer ‘No,’ and on some of them was the answer ‘Yes.’ His was a ‘Yes’ face.”[3]

The woman of his dreams initiates intimate friendship, has a “yes” face, and doesn’t force her husband to search for that welcoming look anywhere beyond his own front door.

We listen with our lips. Now maybe you thought the whole idea of listening was to keep the lips zipped. However, one of the most effective ways to show that we are truly listening is to complete the loop in the conversation by asking follow up questions or making comments to show we’re are engaged. For example, if your husband comes home from work and says, “I had a terrible day at work.” Then you would complete the loop by responding, “Really. Tell me what happened.”

Such a comment will show him that you care and are interested in what happened during his day.

As your husband begins to share the details of his day, following up with good questions shows that you are interested and in touch with what he’s experiencing. If his comments are met by silence or a sharp detour of you telling him what went on in your day, he will think that you don’t care about what is going on in his life and be very likely to withdraw or find someone else who will listen.

We listen with our mind. As you can see, listening is not a passive activity but a very active one. A good listener is trained to use every homing device God has provided: eyes, ears, facial expressions, lips, and mind. One of the best ways to cultivate conversation with your husband is to ask good questions.

There are two types of questions to choose from: closed and open. A closed question is one that can be answer with one word: “Good,” “Bad,” “OK,” “Yes,” “No.” For example, “Did you have a good day at work?” is a closed question. “What happened at your sales meeting today?” is an opened question. An open question is one that draws out the person and requires a more thoughtful answer. Once your husband begins to answer such questions, complete the loop by asking follow-up questions. As soon as you begin to give unsolicited advice or judge his actions, the wall will go up and the opportunity to initiate intimate communication will slip away.

Here are 25 great questions to initiate conversation. Remember, timing is everything.   These are questions that beg discussion, so asking them during a football game or when he’s winding down after an exhausting day at the office might not be the best time. The questions are endless! Let these few sparks questions of your own!

We listen with our heart. Finally, the woman of your man’s dreams listens with her heart. She listens to the feelings as well as the facts. She uses her intuition to process information. What lies in the heart of a man is like treasure in deep waters, but a wise woman will draw him out (Proverbs 20:5). The more we listen with our hearts, the more they will speak from their hearts. In order for this level of communication to take place, a man must feel completely safe, trusting that you would never divulge a confidence or share his heart with anyone else. If he does not have that assurance, you most likely will not have the honor of engaging in the deepest level of intimate communication. When a man feels he can share his heart without betrayal, judgment, or condemnation, he will take the woman of his dreams to new depths of his soul that many leave unexplored.

Years ago, I went snorkeling in the Caribbean for the first time. All my life I had been around water – bobbing up and down in boats on the ocean, skimming across the surface of lakes, and canoeing down the narrow Tar River in my hometown. Occasionally I’d catch a glimpse of fish scurrying though the currents or be entertained by a porpoise or dolphin arching above the waves. However, when I put on those goggles and learned to look below the surface, I discovered a whole new world. The sea teemed with sea creatures dressed in vibrant yellow, royal blue, and orange exotic patterns. Gaily colored “four-eyed butterfly fish, rainbow striped parrot fish, buck-teeth porcupine fish, and minnow-like striped zebrafish frolicked about within arms reach. New playmates peeked in and out of the coral reef, teasingly nipped at my toes and flirted with my goggles.

Amazingly, all that beauty existed just below the surface of the water, but I would never have seen it had I not been willing to dive in. The swaying anemone, the craggy coral, the percolating jelly fish, the feathery finned angelfish – all uniquely created and a visual wonder. Likewise, your husband, and my husband, are magnificent creatures! The further we delve into their lives by initiating intimate friendship through effective communication, the more we will appreciate their uniqueness. We have a choice. We can stay on the surface or don the proper gear and dive deeper into their souls to discover the hidden wonders lying just below. Surprises await us each new day – if we dare to dive in and keep exploring.

Twenty Five Ways to be a Good Listener

* SUGGESTION: I would suggest using one of the list or both – perhaps as a sidebar.

Sharon Jaynes is popular speaker at women’s events and author of 18 books including Becoming the Woman of His Dreams-Seven Qualities Every Man Longs For and Praying for Your Husband from Head to Toe. To find out more about Sharon’s speaking ministry visit www.sharonjaynes.com. Follow her on Twitter, Instagram, The Praying Wives Club and Facebook.