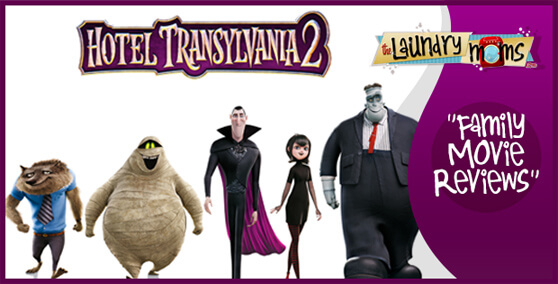 The animated “Hotel Transylvania 2” is back in business with Drac, his band of merry monster’s (Frankenstein, the Mummy, Wolfman and the Invisible Man) and his new half-human, half-vampire grandson, Dennis. Vampa Drac is worried that his namesake is not showing signs of being a vampire, so he arranges for his daughter and son-n-law to leave town, so he can put Dennis through “Monster-in-training” boot camp. Drac struggles with training until grumpy, great-grandpa Vlad, shows up to try things his way.   Familiar voices of Adam Sandler, Selena Gomez, Mel Brooks, Kevin James, Steve Buscemi and David Spade, star.

This PG family-friendly comedy is full of slap-stick, adolescent humor kids will enjoy and numerous comedy bits about old-time monsters trying to adjust to modern technology that adults will relate to. Parents will pick up on a deeper, PC subtext, about labeling a kid as “normal” and the need for “open-mindedness” in life and love. But the real spoof, is that the monsters aren’t spooky at all to a 21st century culture that’s conditioned to seeing them and more interested in taking selfies than being scared. Now that’s the scary part!