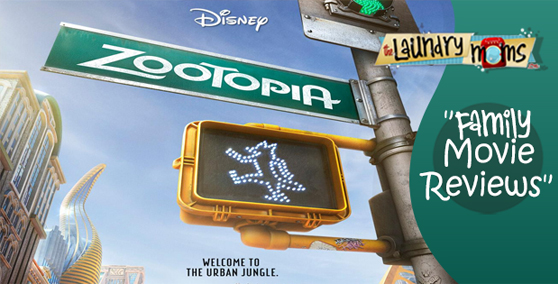 Zootopia is Disney’s 55th animated film about a special world of animals where Judy, an upbeat rabbit cop (voiced by Ginnifer Goodwin) is forced to partner with Nick (voiced by Jason Bateman), a sly, scam artist fox.  The two work together to uncover some disturbing occurrences among the locals.

The PG family-friendly whodunit is a unique and funny adventure with animals that are proportioned in size to the story and cleverly written to parody our culture. I love the animation with its vibrant colors, lifelike animals and a fun town that will delight children. The dialogue is witty and entertaining with amusing in-jokes, funny references to Frozen and a Shakira song (she’s the “Gazelle” singer) that’s sure to get stuck in your head. Ultimately, the story is about inclusivity, empowerment, judging others and how quickly people (or in this case animals) can resort to stereotyping when a situation turns scary but it does it without feeling preachy.

Zootopia is a fun story with lifelike animation that will entertain all ages.