Holly on Hollywood – Won’t You Be My Neighbor 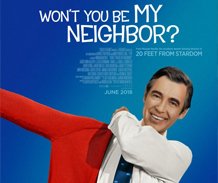 “WON’T YOU BE MY NEIGHBOR” is Academy Award-winning documentary about the life and work of children’s programming/public TV pioneer Fred Rogers, especially in the 90’s and 80’s. Through extensive footage and interviews with Rogers’ widow, Joanne; their two adult sons; and a host of colleagues and friends, including Yo-Yo Ma (whose son is one of the documentary’s producers), the film documents how Rogers, went from being an educated and ordained, Presbyterian minister, who dedicated his life to service, faith, and young children.

The PG-13 documentary is a touching, triumphant tribute to Fred Rogers, a remarkable man who reminded generations of young children that they mattered and that they were loved. Rogers was truly the person you saw on camera; upright, compassionate, and loving.  He was a devout Christian who was as disciplined and intentional off camera as he was on camera (he swam every single morning and weighed 143 lbs. his entire adult life) and dedicated to creating quality children’s programming for young children. Rogers may have been gentle and mild-mannered, but he was also quite passionate about his work, the show, and the role it played in children’s lives.  Mixing footage from the show and interviews with Rogers’ widow, children, colleagues, and friends, the film is an emotional and nostalgic experience for adults who grew up watching Mister Rogers. Rogers was a lifelong Republican, and he was also a supporter of government funding for public television. He was a mentor, friend, and champion of African Americans when it was considered taboo to do so on television.  And Rogers was a big believer that even very young children can handle and understand a lot. The documentary is focused on the positive aspects of Rogers’ personal and professional life and shows everyone what a truly compassionate, thoughtful and crusade to put children, not profit, first in children’s programming. There is a brief segment that shows how Rodgers was made fun of and parodied by comedians and late night television. Otherwise, this is a kid friendly documentary for mature kids to adults – but mostly this is for nostalgic adults who loved to watch this man as they were growing up.