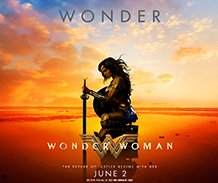 Wonder Woman, is the latest DC comic movie to feature a female superhero. Diana (Gal Gadot) also known as Wonder Woman, was raised by Amazon women warriors to be the best in battle and defend their hidden homeland.  Diana was raised by strong role models, her Queen mother (Connie Nielsen) and her warrior Aunt Antiope (Robin Wright). Diana has never seen a man, so when she sees a plane crash into the ocean, she jumps in…

….to save the pilot, Steve Trevor (Chris Pine) and is immediately fascinated by who he is and where he comes from. After learning Steve is a spy who wants to save mankind, Diana decides to join him to defeat evil. With the help of Wonder Woman, an enemy is defeated and a new superheroine is born!

This PG-13 “wonder” story has witty dialogue, epic battles, and a brief scene of implied nudity when Steve gets out of a bath and covers himself. Gadot is perfectly cast as a sort of naïve yet smart woman who has a tender heart for mankind, is brave, a cool fighter and is an inspiration for girls. Gadot was born in Israel and served in the Israeli army so her fighting skills are both believable and impressive. I especially enjoyed the chemistry and banter between Diana and Steve when they discussed how his looks were “above average” for a “male specimen”.  I saw Wonder Woman with my sisters/girlfriends and we cheered and applauded all the way through this epic and entertaining story!