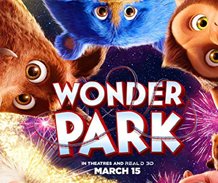 Wonder Park is a colorful adventure about ten-year-old June (voiced by Brianna Denski) who has a wild imagination that is encouraged by her mother (Jennifer Garner). The two build a magnificent toy amusement park in her yard, with rides that are run by her stuffed toy animals. When her mother gets sick with cancer and has to go away for treatment, June soon loses interest in her park, her friends and life, so her dad sends her to summer math camp. On the bus, June imagines that her dad needs her so she escapes to return home to help him. Along the way, she gets lost in the woods and discovers her magical Wonderland in disarray, slowly being destroyed by darkness. As time runs out, June and her favorite animals join together to save her magical Wonder Park. Mila Kunis, Matthew Broderick, and Ken Jeong, join the voice cast.

The PG colorful, animated adventure, is kid friendly and has funny animal characters that will entertain the little ones and celebrates a girl who is smart in math, loves to invent things, solve problems, has lots of friends who enjoy her creativity and loves her parents. There are lots of laughs, slapstick comedy and a wonderful cast of characters who help June discover how to solve her problems in creative, “splendiferous” ways. But parents, the story also contains themes of a mother dealing with (and recovering from), cancer. Because of that, the darkness that is destroying Wonder Park is symbolic of the emotions June is dealing with in her own life. When she is told her mom has cancer, June becomes sad, depressed, doesn’t want to play with friends and loses interest in the Wonderland she created with her mom. It’s the wisdom of her mother that comes to June time and again, that sees her through the troubles and dangers of the land they created together. Parents may need to explain that symbolism to younger children. The theme of June’s light driving out the darkness creates the beautiful allegory that is the wonder in “Wonder Park”.