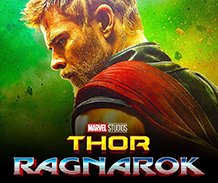 “Thor: Ragnarok” opens with Thor (Chris Hemsworth) in chains, he then suffers a terrible personal loss, has his beloved hammer destroyed and becomes a prisoner on a strange planet where his buddy Hulk (Mark Ruffalo) is also imprisoned. Thor discovers life-changing truths about Asgard and recruits a Valkyrie (Tessa Thompson) to help battle his evil sister Hela, Goddess of Death (Cate Blanchett), in a race against time to stop Ragnarok – the destruction of Asgard and save his people. Tom Hiddleston, Anthony Hopkins, Idris Elba, Jeff Goldblume also star.

The PG-13 is for mild language, adolescent bathroom humor, scenes of drinking, intense action and mostly gore-free, non-graphic, sci-fi violence, which makes it best for mature pre- teens to adults. This is the funniest, quirkiest, less serious and most fun of Marvel’s series about Thor – and it succeeds, epically, on many levels – similar to “Guardians of the Galaxy”. Hemsworth makes Thor more than likable proving he has comedic skills to go with his Thor muscles as he evolves into the Great King he will become. Blanchet is brilliant as villain Hela who commands every scene she’s in. But it’s the entire cast that makes the movie work; including Benedict Cumerbatch (in a small scene) and hilarious cameos by Matt Damon, Sam Neill and Luke Hemsworth (yes he’s his brother!) “Ragnarok” has demons, a giant dog, ugly creatures, the Goddess of Death, sword and sorcery, gladiator combat, a lovable rock character, spaceships, incredible CGI, super cool magic from Doctor Strange and a killer theme for Thor using Led Zeppelin’s “Immigrant Song”. I had the best time, laughed out loud and absolutely loved “Thor: Ragnarok” – it’s a triumphant in this universe and beyond!