Holly on Hollywood – The Space Between Us 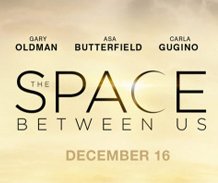 Holly on Hollywood
“The Space Between Us”
by Holly McClure

The Space Between Us is a sweet love story about Gardner Elliot (Asa Butterfield) born to an astronaut who died at childbirth in East Texas, the first manned colony on Mars. Gardner grew up under the tutelage of scientists, helping crews maintain the space station, creating a robot to be his friend and more recently, skyping with a pretty, troubled teen with an attitude named Tulsa (Britt Robertson), who was raised in foster homes and counts Gardner as her only friend. Gardner longs to go “home” to earth, meet Tulsa and experience the things normal teenagers do, but he’s told he has an enlarged heart and the trip to Earth would kill him. Despite the risks, Gardner makes the trip, escapes his caretakers, meets up with Tulsa and the two head west to find and meet, the father he never knew. With the authorities hot on the couple’s trail, it’s a race against time to get Gardner back to Mars. Gary Oldman and Carla Gugino also star.

The PG-13 sci-fi-fantasy-romance, is aimed at the young adult crowd but….

….because of some language and a brief romantic scene in a sleeping bag with bare shoulders under the stars (implying the couple spent the night together), I can’t recommend “The Space Between Us” for children or pre-teens. Gardner is refreshingly naïve, a techno geek with an alien-like walk (due to Earth’s gravity), who enjoys the simple things like eating a Mar’s bar, seeing the colors of the earth, romping in the ocean and falling in love. Tulsa starts out tough but in the end, love softens her heart, presenting a life-changing opportunity for her as well. This is a sweet story of young love, a celebration of friendship and a testimony to the need for people to connect with family and friends.