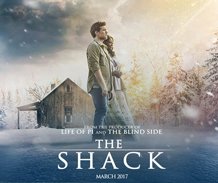 Holly on Hollywood
“The Shack”
by Holly McClure

“The Shack” is based on the popular book about Mack Phillips (Sam Worthington), a loving family man who takes his three kids on a camping trip, gets distracted by a boating accident and discovers his youngest has been kidnapped. The police are called, a massive search takes place and Missy’s bloody dress is found in an old shack. Time passes and the grieving family struggle to move past the devastating tragedy.

One day, Mack gets a mysterious invitation signed “Papa” (his wife’s name for God), inviting him to come to the shack for the weekend. Curious, Mack goes to find answers about his daughter’s death, but instead, finds…

…love, forgiveness and redemption, when he meets a woman called Papa (Octavia Spencer), a carpenter named Jesus and a female Holy Spirit named Sarayu. Tim McGraw and Graham Greene also star.
The PG-13 is for mature audiences because of themes dealing with religion, a child’s kidnapping and death, and suggested violence. The truthful dialogue about Mack’s spiritual struggle and the visual journey he takes to make sense of the evil he’s suffered, makes for a powerful and moving, movie experience. In spite of some questionable theology (too much to cover in this review), I was moved to tears numerous times by the compelling characters, emotionally cathartic dialogue, great direction and solid performances by Worthington, Spencer and cast. And I enjoyed several creative scenes, like Mack and Jesus running on water across the lake and planting a garden that grows with tears.

I’ve been a Christian all my life and a family film critic for 25 years. Through the years I’ve seen great Christian movies – really, really bad ones – and lots of mediocre ones in-between. All of them made with the hope of winning souls for the Kingdom. But rarely have I sat in a theater with a movie that asks hard questions (How can a good God allow evil? How can God love the unlovable and forgive the unforgivable?) and see an audience of all ages, with tears running down their cheeks, emotionally and spiritually moved by the film. For all of the controversy surrounding “The Shack”, it’s message about God’s boundless love, forgiveness and acceptance, will hopefully plant a seed, encourage people to ask questions, and lead them to the Bible for answers.