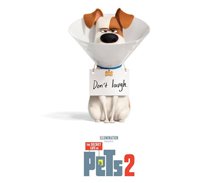 THE SECRET LIFE OF PETS 2 brings the beloved crew from the blockbuster back for another adventure. Max (voiced by Patton Oswalt) is now feeling protective over his owner’s toddler while they visit a relative’s farm. He’s given some lessons in letting go, by a gruff old hound (Harrison Ford). Back at home, Gidget (Jenny Slate) has lost Max’s favorite toy and has to pass as a cat to retrieve it. And the hilarious outspoken Snowball the bunny (Kevin Hart) , believes he’s a superhero and joins forces with Shih Tzu Daisy (Tiffany Haddish), to rescue an abused baby tiger named Hu from a cruel circus.

The PG family-friendly animated sequel is kiddie friendly with only a few things that might be scary like, menacing wolves and a cartoonishly villainous lion tamer. Animals punch and throw knives at one another and a bad guy is hit by a car, but no one is ever really injured. As usual, there is some mild language (“pissed, jerk, idiot, stupid, turd”) you may have to address with little ones afterward. Hart and Haddish are perfectly cast together for lots of laughs and I loved Ford’s voice of sage wisdom. The sequel delivers the same colorful, fluffy animals and cute relationship with their owners, that makes the storyline even more relatable to kids. There is a message for parents about concern for your children’s safety – loosely contrasting different kinds of parenting. But the message kids will get is to face and embrace the changes life inevitably brings….and love your pets like family!
“Remember to Choose Your Movies Wisely”