Since “The Revenant” has an R rating, I’m reviewing the Oscar nominated film to help you “choose your movies wisely”! 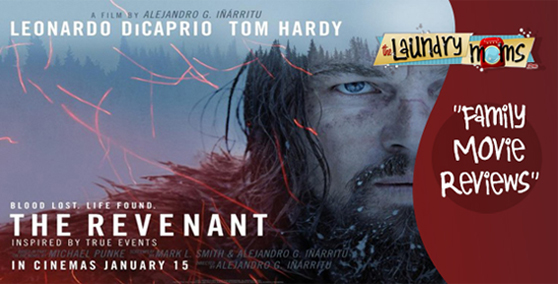 Inspired by true events of legendary frontiersman Hugh Glass (Leonardo DiCaprio), The Revenant, opens with Glass guiding the fur trapping expedition to safety after fleeing a band of Arikara tribesmen who ambushed their camp. While Glass is exploring a forest, he’s brutally attacked by a mother grizzly. Barely breathing, he’s left behind with fellow trapper (Tom Hardy) who tragically betrays Glass and leaves him for dead. With no weapons and wracked with pain, he drags himself to find food, rest and shelter, until his wounds heal. Guided by unimaginable grief to complete his 200-mile trek for revenge, Glass overcomes incredible obstacles, a vicious winter and the pursuing Arikara, who have a score to settle.

Director and co-writer Alejandro Iñárritu has created a visually stunning frontier epic, giving audiences a rare glimpse of the untamed wilderness of 1820’s America. Using natural light, sound and wide angles, he created a realistic and brutal winter wilderness that Glass survived. By the end of the movie I was actually cold and exhausted! There are flashbacks of his wife and son that guide and speak life into him and although there is little dialogue, DiCaprio projects every human emotion necessary to connect the audience with his journey.

The R rating is for realistic frontier combat and violence, a brutal bear attack, a sexual assault between a trapper and a Pawnee woman (no nudity), brief male nudity of a man attacked by Indians, profanity and language. So this is clearly a movie for mature audiences who can handle the intense content, themes and brutal battles between man and nature.

I was enthralled with this incredible story of the power of the human mind and spirit. And I appreciated the profound spiritual references about God and revenge. DiCaprio deserves an Oscar for this unforgettable performance.