Holly on Hollywood – The Promise 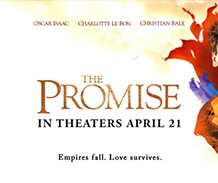 Holly on Hollywood
“The Promise”
by Holly McClure

“The Promise” is a romantic historical drama set at the end of the Ottoman Empire, before World War I. In 1914, Michael (Oscar Isaac), a brilliant apothecary, travels to Constantinople to become a doctor. While staying with a relative he meets a beautiful Armenian named Ana (Charlotte Le Bon) and her boyfriend, renowned American journalist Chris Myers (Christian Bale). Myers is there to expose the genocide of the Armenian people by documenting the killing of Armenian men and the deportation of women, children, the elderly and sick, on death marches leading to the Syrian Desert. The three are swept up in a love triangle while….

….literally fighting for their lives to save the ones they love.

The PG-13 is for mature audiences with wartime violence, gunfights, explosions, an implied romantic scene, visuals of genocide and a few bloody images. Several scenes show the Armenians resisting and fighting back, culminating in a mountainous battle where they held off the Turks for over 50 days. This epic tale of love and war reminded me of the classic “Doctor Zhivago”, dramatically conveying the horror and genocide that took place against 1.5 million Armenians (a fact Turkey denies ever happened) andeerily reflects what is going on in Syria today. This is a beautiful film that’s well written, with an excellent cast and inspiring scenes, including one where an American ambassador demands Myers release from the Turkish government (my audience erupted with applause at that scene). I enjoyed this story of love,heroism, faith, self-sacrifice and taking a stand for the value of life.