Holly on Hollywood – The Nutcracker 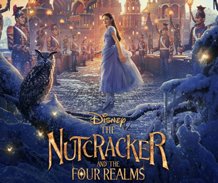 THE NUTCRACKER AND THE FOUR REALMS is a fantasy adventure based on the classic Tchaikovsky ballet. Clara (Mackenzie Foy) is the middle of three Stahlberg children, who are spending their first Christmas since the death of their mother.

When Clara attends a party at their godfather Drosselmeyer’s (Morgan Freeman) home, he gives the children gifts but Clara’s is special – it leads her on a magical adventure to find a key to a Kingdom her mother wanted her to find. In this magical land she meets the fairy Sugar Plum (Keira Knightley) who warns her that Mother Ginger (Helen Mirren), is trying to take over all of the realms. Sugar Plum convinces Clara to help bring peace to their world, so the girl and her trusted new friend, nutcracker soldier Phillip (Jayden Fowora-Knight), set out to save the day.

This PG holiday movie is more family friendly than kiddie friendly because of intense chase scenes, a large scary looking creature made up of hundreds of mice, creepy looking clowns, mean tin soldiers, sword fights, and Mother Ginger’s face is scary looking and could bother some kids. Clara and her family mourn her mother’s death but Clara gets to see her in flashbacks. GIrls will enjoy the beautiful costumes and impressive sets. But all will enjoy watching Foy who is beautiful and talented – a delightful role model of bravery, and brains. One of the more beautiful moments that will capture ballet lover’s hearts is Misty Copeland’s ballet performances to Tchaikovsky’s score – she’s even enthralling as she dances throughout the credits. The Nutcracker and the Four Realms  is Disney’s version of a traditional holiday tale that will entertain the whole family and hopefully, become a favorite new tradition!