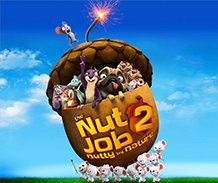 Holly on Hollywood
“The Nut Job 2”
by Holly McClure

The Nut Job 2: Nutty by Nature is the sequel to 2014’s The Nut Job. Surly Squirrel (Will Arnett) and the gang are back in Oakton where the evil mayor has decided to bulldoze Liberty Park and build an amusement park in its place. Surly and his ragtag group of animal friends, band together to save their home, defeat the mayor and take back the park. Katherine Heigl, Jackie Chan, and Maya Rudolph also star.

The PG kid-friendly rating is for action and some crude humor. The story continues with…

…the same characters from the first one looking for a new food source. There’s an emphasis on scatological humor (i.e., burp and fart jokes), as well as physical comedy gags in which a character is electrocuted, bonked on the head, or otherwise injured in a way that’s played for laughs. Maya Rudolph is truly Precious, a bug-eyed pug with a penchant for licking the fur of fellow beasts. A favorite is Jackie Chan as Mr. Feng, an adorable small Asian mouse and martial-arts master, who hates being called cute while preferring to be known as “a weapon of mouse destruction.” He and his look-alike army lend a lot of humor with their cleverly animated kung-fu moves. I also laughed every time one character calls he and Precious, “Fracious.”

Although the critic’s ratings were bad, the kids in my audience were laughing and enjoying this lighthearted, animated entertainment, with a message about creating your family by choice and taking care of one another. These days, that’s not such a bad thing to teach our younger generation!