Holly On Hollywood – The Mountain Between Us 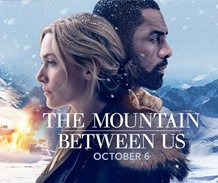 Holly on Hollywood
“The Mountain Between Us”
by Holly McClure

“The Mountain Between Us” is a romantic drama starring Kate Winslet as Alex, a photojournalist heading home to be married and Idris Elba as Ben, a neurosurgeon on his way to save a patient. The two meet at Salt Lake City airport after their flight is cancelled, they charter a plane but during the flight, the pilot (Beau Bridges) has a stroke, the plane crashes and the couple (along with the pilot’s dog), are stranded on top of a mountain in the middle of nowhere. Despite wounds, starvation and exhaustion, the two begin a long journey down the mountain with hopes of being rescued.

The PG-13 adventure, drama, is best for mature, older teens to adults, because of adult themes, brief strong language, a sensual, non-explicit sex scene (no body parts shown) and a brief shot of Alex in a see-through tank top. This is an interesting survival story with an intimate look at two strangers who learn how to depend and trust each other, when their lives depend on it. Winslet and Elba are incredible actors who were literally flown to the top of a mountain every day and did all stunts themselves with no CGI affects. They emotionally go from thinking they’re going to die to fighting for their lives while facing death. There are breathtaking scenes (shot in Canada) with themes of courage and perseverance. “The Mountain Between Us”, is based on the novel by Charles Martin and was a thoroughly compelling movie, from beginning to end.