Holly on Hollywood – The Man Who Invented Christmas 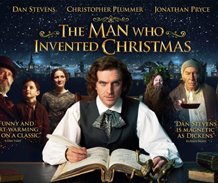 Holly on Hollywood
“The Man Who Invented Christmas”
by Holly McClure

“The Man Who Invented Christmas” is a fictionalized drama set in 1843, about how 31 year old English author Charles Dickens was inspired by real-life characters to write the Christmas themed story – A Christmas Carol. Dickens (Dan Stevens) is looking for his next novel idea, when a series of strangers, relatives, and friends, inspire him to write about Christmas. As his story ideas develop, his main character Scrooge (Christopher Plummer) appears to him, suggesting topics he should focus on for different characters. When Dickens’ father shows up unannounced, his presence brings back painful memories for Charles about being abandoned by his dad when he was young and forced to work in a factory where he was bullied and mistreated. Ultimately, as Dickens is developing his novel, he learns to forgive his father, gains a new compassion for those in need and a heart to be generous…just like his character Scrooge in A Christmas Carol.

The PG family friendly story is more for mature pre-teens to adults, because of it being a period piece. People speak with accents and there are mature themes dealing with a flashback to Charles being abandoned by his father and forced to work in a factory. The way the story is told is entertaining, well-acted and fun to watch how a great cast creates the characters who could have inspired A Christmas Carol. Stevens gives a convincing performance as Dickens, Plummer is brilliant as the real and imagined Scrooge, and Jonathan Pryce manages to be lovable as Dickens’ father who tries to live off his son’s fame. Dickens wrote his book 174 years ago in less than two months in the fall of 1843. He chose the artist for illustrations, the look of the book and published it himself. And thanks to Scrooge’s turn of heart, Dickens saved his career and perhaps, Christmas itself. “God bless us, every one!”