Holly on Hollywood – The Lego Movie 2: The Second Part 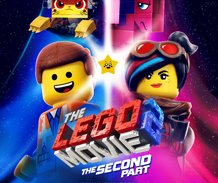 Holly on Hollywood
“The Lego Movie 2: The Second Part”
by Holly McClure

The Lego Movie 2: The Second Part is the funny, entertaining sequel to The Lego Movie in a story about Emmet (voiced by Chris Pratt) and Lucy (Elizabeth Banks) who are battling mysterious invaders trying to destroy Bricksburg and kidnap Emmet’s best friends, including Lucy. The movie is set in the imagination of a young boy named Finn (Jadon Sand), who used LEGOs to process his complex feelings about his overbearing father in the original film, and now, in the sequel, uses LEGOs to cope with his little sister Bianca (Brooklynn Prince) who wants to play with his toys and always breaks them. It’s up to Emmet and his ultra-cool new partner Rex Dangervest (Chris Pratt, again) to rescue them all, before they start to like living in an adorable world of glitter, pop music and hunky vampires, ruled by Queen Watevra Wa’Nabi (Tiffany Haddish).

The PG family-friendly adventure has a great cast of wacky characters, a velociraptors crew for Rex’s spaceship who love tennis, wonderful new musical numbers and an ode to the movie’s closing credits. lots of action, including chases, fights, rescues, explosions, dinosaurs, spaceship battles, and more. Since everything (and everyone) is made out of Legos, the stakes never feel too intense but younger or more sensitive kids might be upset when sympathetic characters are in peril or argue with each other. Otherwise, content is quite mild, with a couple of uses of words like “heck” and “butt” and some flirting between characters (Batman also shows and sings about his pecs). Pratt is hilarious and makes this witty movie fun to watch. There are positive messages about perseverance, teamwork, friendship, cooperation, and loving people for who they are, not who you think they should be. Be warned: If you’ve finally gotten “Everything Is Awesome” out of your head,  the “Catchy Song” is the next one to take its place.
“Remember to Choose Your Movies Wisely”