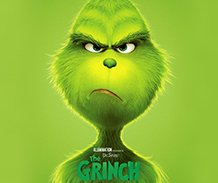 Holly on Hollywood
“The Grinch”
by Holly McClure

“The Grinch” follows the classic story of Dr. Seuss’s original book, narrated by Pharrell Williams and starring the voice of Benedict Cumberbatch as the grouchy green creature who lives by himself with his dog Max. Whosville is a colorful and cheery little village known for its love of Christmas, decorations, yummy food and lots of presents. As a result of a childhood trauma, the Grinch hates everything about Christmas. After a tree-lighting ceremony, he’s reminded of his trauma and vows to steal the holiday from Whosville. Meanwhile, Cindy Lou (Cameron Seely), the daughter of overworked single mother Donna Lou Who (Rashida Jones), plots to capture Santa Clause so she can ask him for a very special wish. As Cindy Lou and and the Grinch plot their plans for Christmas – their lives end up changing each others for the better, much like the Dr. Seuss classic.

The PG kid-friendly story is richly animated and beautifully realistic-looking, with a modern family storyline that involves Cindy Lou and her single mother. This Grinch isn’t an evil creature who hates the joy of Christmas, he’s more of a lonely creature who rejects others before he can be rejected by them. I liked the fact that he isn’t evil or scary but in the end, more lovable. Cumberbatch is the new Grinch for a new generation, with humorous gags that adults will enjoy as much as kids, funny sidekicks (his dog Max, reindeer Fred and a goat, are scene-stealers) and entertaining family fun that ends with a heartwarming message about bringing loved ones together (friends or family) to share Christmas with those you love, “who”ever that may be.