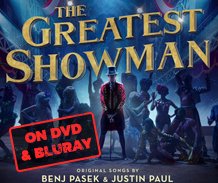 Holly on Hollywood
“The Greatest Showman”
by Holly McClure

“The Greatest Showman” is based on the life of Phineas T. Barnum who rose from poverty to become the world-renowned creator of his own circus. The story follows Finn’s (Hugh Jackman) climb to fame and wealth with his wife Charity (Michelle Williams) and two girls. He opens a museum of oddities and ultimately, his believe-it-or-not Circus filled with unusual-looking people and acts like the bearded lady (Keala Settle), Tom Thumb (Sean Humphrey), a black trapeze artist (Zendaya), Dog Boy, Tattoo Man and a cast of others. Zac Efron and Rebecca Ferguson also star.

Hugh Jackman is the star of “The Greatest Showman”, out on DVD. He also happens to be a Christian…

His father was saved at a Billy Graham Crusade before Jackman was born, so he grew up in a religious home. When he was 13, Jackman saw himself on stage and thought he was destined to be a preacher. He says he prays before every role that he takes and before every performance. “The Greatest Showman”, is not your typical musical and proves once again, that Jackman truly is one of the greatest actors on stage and screen. This is a well-written and directed account of P.T. Barnum, who started the famous circus. With an excellent cast, colorful characters and memorable songs, it is a fascinating story for all ages…I loved this movie and so did my grandkids!