The Finest Hours is based on a true rescue story about a massive storm that hit New England on February 18, 1952, ripping the SS Pendleton oil tanker in half and trapping 32 sailors in the aft section, adrift with no radio or commanding officers.  First assistant engineer Ray Sybert (Casey Affleck) takes charge of the frightened crew and inspires the men to work together in hopes of being rescued. After a distress call is received, the Coast Guard station in Chatham, Massachusetts sends four men out in a wooden lifeboat, led by Captain Bernie Webber (Chris Pine). The men go above and beyond the call of duty facing frigid temperatures, 70-foot high waves, mechanical failures and hurricane-force winds, to rescue the stranded men. Ben Foster, Eric Bana, Holliday Grainer, also star. 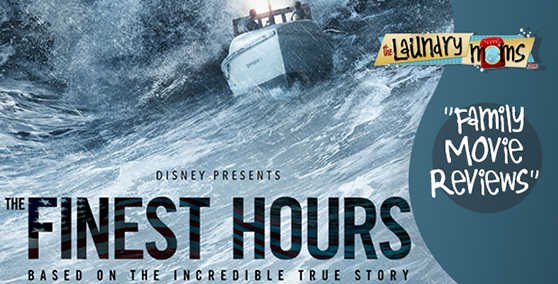 I enjoyed this well-crafted PG-13 man-vs-nature story, that opens with a sweet courtship between Bernie and his girlfriend Miriam then quickly moves into a thrilling nautical disaster. There are plenty of dramatic moments showing what the men on the adrift ship went through and the incredible courage Bernie and his crew faced, as they fought the storm agreeing, “We all live or we all die”. The mind-boggling, realistic special-effects are so terrifying, it makes you appreciate the horrors these men must have faced and affirms the courage, heroism and selfless duty, of the four brave men who, in real life, were all awarded the Gold Lifesaving Medal.